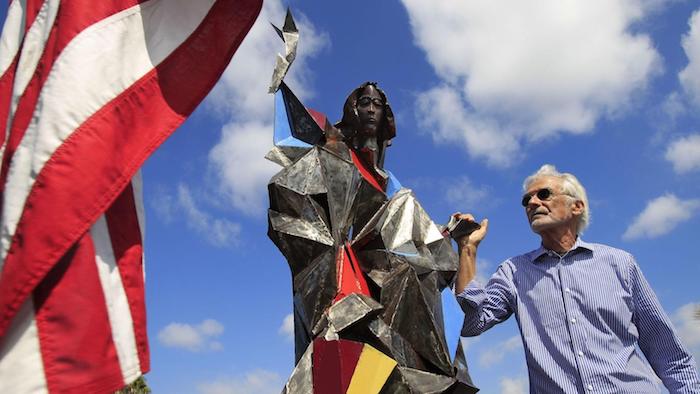 Inspired by the Statue of Liberty, a Catholic church in San Ysidro, California, plans to erect a 40 foot tall statue of Mary overlooking the U.S. border with Mexico to welcome new immigrants:

She will stand tall, with a torch held high, on a hilltop in San Ysidro, overlooking the U.S.-Mexico border region.

Inspired by the Statue of Liberty, the 40-foot-tall monument of Mary, mother of Jesus, will stand as a symbol intended to welcome immigrants and refugees headed to the U.S.

The statue will go up on the hilltop parking lot of Our Lady of Mount Carmel Church, where community members convened Friday to kick off a crowdfunding campaign to raise $1 million to build the monument.

“It will stand as a beacon of hope and encouragement for people engaged in the struggle of the migrant,” said artist Jim Bliesner, who drew inspiration from immigrants across San Diego for the statue’s design.

The $2 million project, spearheaded by nonprofit San Diego Organizing Project, already has received $1 million from the California Endowment, a private health foundation. The hope is to raise the next $1 million and build the statue by early 2019.

It will be named “Welcome the Stranger.”

Bishop Robert McElroy, of the Roman Catholic Diocese of San Diego, said the monument and its location will send a strong message about the border.

“It is a symbol and powerful reminder that for us, for us as people of faith, for us as America, the border represents not a line of separation,” he said, “but a line that unites us to Latin America.”

He said the statue will commemorate the past, the present and the future of the U.S.

First, he said, it will be a reminder that the U.S. is a nation of immigrants who contributed to “help build America.”

“That gets lost in the current conversation so easily,” he said.

The statue also will represent hope for a brighter future for the waves of immigrants and refuges who one day will begin what McElroy described as an arduous journey to the U.S.

The idea of the sculpture surfaced roughly a year ago. It was designed by Bliesner with input from community members who attended workshops, where they shared their ideas and personal stories.

“Most of the inspiration came from listening to members of the congregation and the community about how emotional this subject is. People were crying, people were telling their stories,” Bliesner said. “I couldn’t help but take that away as the primary element in creating the piece.”

As ideas were generated, Mary emerged as a symbol of hope. Community members noted she fled with her family to Egypt as a refugee soon after the birth of Jesus.

The statue incorporates several symbolic elements. The “turgid, severe geometry” of Mary’s robe, which has several perforations, represents the difficult trek immigrants embark on, while spots of color in the folds of her robe symbolize moments of kindness in their journeys, Bliesner said.

The torch, he said, represents hope for a brighter future.

The Catholic Church in America was infiltrated and subverted by cultural marxists and zionist sympathizers over 50 years ago during Vatican II, and this statue of a “brown” Mary is a perfect symbol of that subversion. In order to survive, the Catholic Church now has to pander to its ever enlarging Latino constituency, as Whites continue to leave the Church because it no longer serves their interests.

No doubt this statue will become a target for vandalism and will require armed guards 24/7, but that’s only natural for multiculturalism — it needs to be enforced at the end of gun barrel.  Large parts of California will eventually become indiscernible from Tijuana today, especially the larger cities and mexi-fied suburbs.  And at that point, there will be no reason for Mexicans to come to America for a better life — because it will be no different on either side of the so-called border.