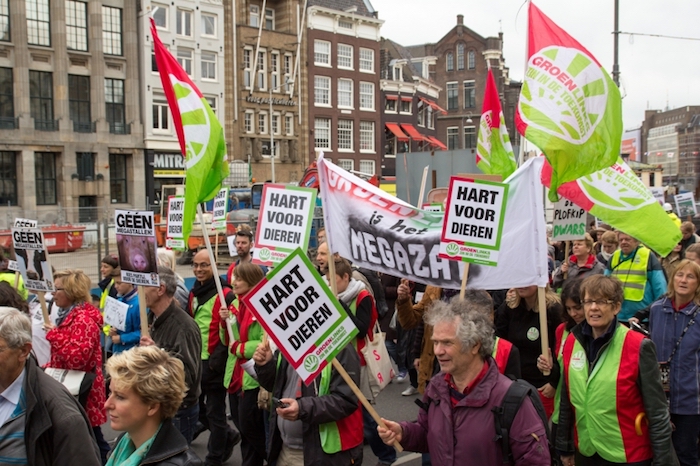 When a nun discovered that a Ugandan asylum seeker who was staying at a Catholic homeless shelter was an admitted lesbian,  she told the lesbian that she’d have to leave. Now a public protest is planned:

An Ugandan asylum seeker who was staying with the nuns of Missionaries of Charity in Amsterdam, was not allowed to return to the shelter after she revealed that she is a lesbian and helped with the Canal Pride Parade. RozeLinks, the GroenLinks branch focused on LGBTQ rights, is organizing a ‘lesbian kissing-in’ on August 8th, Savanna Koolen of Rozelinks said to Het Parool.

Justine fled Uganda for the Netherlands last year because of her sexual orientation. She was not granted refugee status. On Friday she moved into the Missionaries of Charity’s 24 hour shelter, while her lawyer worked on a new asylum application. That same day she went to help RozeLinks with their Canal Parade boat for Amsterdam Pride.

“When she returned to the shelter on Friday and told the nuns where she had been, she was told that she was not allowed to sleep in the shelter”, Koolen said. She spoke to both Justine and one of the nuns. “She was told that her presence would be dangerous to the other women and children who slept there. Unless she denies being a lesbian from now on, she had to leave.”

Since then, Justine has been staying with a RozeLinks member. She already spoke to the police and has an appointment to file official discrimination charges on Wednesday, Koolen said.

On Wednesday RozeLinks will protest against this discrimination. They call on women to gather and kiss in front of the shelter. The protest is a statement to the nuns, but also to show Justine support, Koolen said to the newspaper. “We want to show her that she can be who she wants to be here and that many Amsterdammers don’t find what these nuns did okay.”

Predictably, this group of sodomites has no problem speaking for all “Amsterdammers” as if everyone in the city–and presumably the entire country–agrees with them completely–that an African lesbian, whose application for asylum has been rejected, has the “right” to demand that a private Catholic shelter allow her to stay there even though she is an abomination in the eyes of God, from the nun’s perspective.

And what exactly are the police going to do about this?  Arrest the nun for “inciting hate”?  Then next thing you know, she’ll be accusing the nun of racial and gender discrimination, and she’ll be granted asylum as a national hero. Twenty years from now, there will be a statue erected in the middle of Amsterdam to commemorate this African sodomite, and all Amsterdammers will worship at its feet.