CDC: Don’t Be ‘Alarmed’ When Lots Of People Start Dying After COVID Vaccination — They Would Have Died Anyway 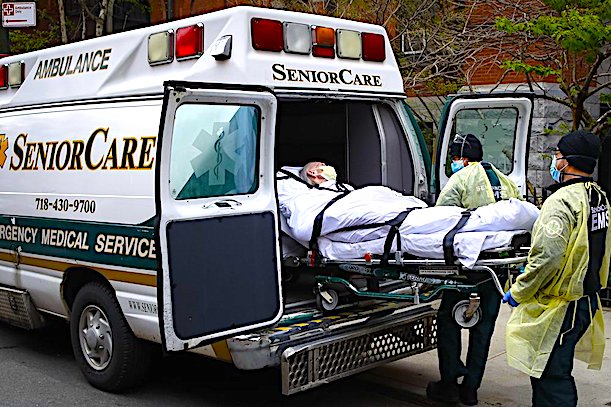 Clearly, the pro-vaccine, pro-pharma media machine is concerned that when large numbers of people — especially the elderly in nursing homes — start receiving the COVID vaccines, many will die from the vaccine — but they want to reassure the public that these deaths will have nothing to do with the vaccine — that these people would have died anyway:

The vote to recommend long-term care residents be among the first to receive Covid-19 vaccinations was not unanimous.

Out of a panel of 14 CDC vaccine advisers, a lone doctor said no.

“Odd woman out, I guess,” Dr. Helen “Keipp” Talbot, of Vanderbilt University, told her colleagues. “I still struggle with this. This was not an easy vote.”

Talbot was worried about whether the vaccine would even work in such frail, vulnerable patients. Even more, she worried about how it might look if the vaccine failed in that group, or how it would affect public perception if residents died soon after getting the vaccine.

On the other hand, these are the people worst hit by the pandemic. They make up 40% of all deaths so far.

Nursing homes in the Midwest have been particularly hard hit, with a more than 400% increase in weekly cases since mid-September, according to a report published Tuesday by the American Health Care Association and National Center for Assisted Living. During the week of November 15, 49% of new nursing home cases were in the Midwest.

Between mid-September and the week of November 15, there was a 177% rise in new weekly nursing home cases nationwide. The rise in cases has been accompanied by a rise in coronavirus deaths in nursing homes.

“Our worst fears have come true as Covid runs rampant among the general population, and long term care facilities are powerless to fully prevent it from entering due to its asymptomatic and pre-symptomatic spread,” said Mark Parkinson, the organization’s president and CEO…

From a medical standpoint the reason to vaccinate long-term care residents is more complex.

They are the group of Covid-19 patients with the highest mortality rate, and many of the hospitalizations are people who are from long-term care facilities who contract Covid-19 and are hospitalized. When they get sick, it generates a lot of burden on hospitals.

“Those are all very good reasons to vaccinate the residents,” Moore said.

But there is also reason for concern. The Covid-19 vaccines have not been tested in the frail elderly, many of whom are residents of long-term care facilities.

“Since they haven’t been studied in people in those populations, we don’t know how well the vaccine will work for them. We know that most vaccines don’t work nearly as well in a frail elderly person as they would in someone who is fit and vigorous, even if they happen to be the same age,” Moore said…

“I have spent my career studying vaccines in older adults. And we have traditionally tried a vaccine in a young healthy population and then hoped it works in our frail older adults,” she told the committee ahead of her vote. “And so we enter this realm of ‘we hope it works, and we hope it’s safe,’ and that concerns me on many levels.”

When shots begin to go into arms of residents, Moore said Americans need to understand that deaths may occur that won’t necessarily have anything to do with the vaccine.

“We would not at all be surprised to see, coincidentally, vaccination happening and then having someone pass away a short time after they receive a vaccine, not because it has anything to do with the vaccination but just because that’s the place where people at the end of their lives reside,” Moore said.

“One of the things we want to make sure people understand is that they should not be unnecessarily alarmed if there are reports, once we start vaccinating, of someone or multiple people dying within a day or two of their vaccination who are residents of a long-term care facility. That would be something we would expect, as a normal occurrence, because people die frequently in nursing homes.”

On Tuesday, the American Health Care Association and the National Center for Assisted Living applauded the CDC advisory committee’s 13-1 vote to recommend prioritizing their residents.

“More than 100,000 long term care residents have died from this virus in the U.S. and our nursing homes are now experiencing the worst outbreak of new cases since last spring with more than 2,000 residents succumbing to this virus each week,” said Parkinson. “We are extremely hopeful this vaccine will literally be a lifesaver for thousands of residents.”

…The debate on whether to vaccinate residents of long-term care facilities, and the planning to get the vaccinations done, has occurred as the residents themselves have been largely isolated from family and friends in facilities that have been closed to visitors…

Moore said not to expect a change in policy out of the gate.

“Right now, we just don’t have the data to know how well the vaccines will work in these folks, and so we’re going to need to be cautious at first because we know they are by far the most vulnerable to severe illness and death from Covid. We’re going to play it really carefully until we know for sure that these vaccines will really be effective at protecting them,” Moore said.

“As we learn more and we see if the vaccine works really well in these groups, then certainly my hope is that we can help these folks reconnect with their families because they need each other.”

On the other hand, 99% of people who allegedly died of COVID had pre-existing life-threatening conditions — yet we are supposed to believe that this nebulous virus killed them all, not the co-morbidities.

Yet when it comes to the vaccine — all of a sudden we are supposed to believe the exact opposite — that these underlying life-threatening conditions are what is killing these old people, not the vaccine.

Welcome, to the world of Orwellian double-think — where you should never trust the reality that you will see in front of your eyes.

“The Party told you to reject all evidence of your eyes and ears.  It was their final, most essential command.”
—George Orwell, 1984

Let the “trusted experts” interpret reality for you — this medical priesthood will administer the last rites of reassurance as you go gently into that good night.

What we are about to witness is potentially the largest act of silent euthanasia that the world has ever seen — where literally millions of elderly will be killed off — not by the vaccine, of course — but by pre-existing causes that just happened to come to a head right after vaccination.

We saw a glimpse of this in Canadian nursing homes earlier this year — they want these elderly people dying in the nursing homes, not in the hospitals taking up valuable bed space.

And sadly, these elderly people really have no choice — in order to stay in these facilities, they will be told they are required to take the vaccine — but for many of them,  these vaccines will shorten their stays and their lives — and end their isolation.