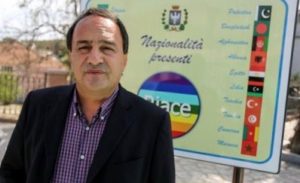 Domenico “Mimmo” Lucano, the mayor of Riace, Italy, who achieved international praise for his pro-migrant policies, was arrested on charges of aiding and abetting illegal immigration to Italy:

He is also accused of misconduct for allocating contracts for the town’s waste collection service to two social cooperatives without a public tender; but additional charges of embezzlement, fraud against the state, and bribery have already been dropped, according to La Repubblica.

The main charge arising from the investigation known as “Operation Xenia”, led by the public prosecutor for Locri and carried out by Italy’s Financial Police, centres on claims that Lucano falsified documents and facilitated sham marriages so that migrants could obtain permits to remain in Italy.

Police say they intercepted a conversation in which the mayor can be heard conspiring to obtain residency for a Nigerian girl who has been denied status in Italy by printing her an ID card listing her as resident in Riace, and advising his interlocutors to have her married as soon as possible to an Italian citizen.

“To disobey these crazy laws I go against the law,” he reportedly says during the conversation.

Lucano and his partner Tesfahun Lemlem have been placed under house arrest.

Riace, a small town in the Calabrian “toe” of Italy’s boot, has in recent years become a symbol of refugee hospitality in Europe and has drawn international attention for the “Riace model”, whereby migrants are given free housing in the town’s abandoned homes, and money allocated by the Interior Ministry is given to social cooperatives which provide the migrants with job training and a small salary.

In 2016 the mayor was profiled in Fortune Magazine’s list of the World’s Top 50 Leaders for his role in devising the novel system.

Lucano has in the past embraced the moniker of “rebel mayor” and has not hidden his disdain for the current populist government’s migration policy, having staged a hunger strike in August when the government blocked certain funds to the town.

Reactions to the mayor’s arrest from the country’s political leaders were mixed.

“Damn, what will those goody two shoes who want to fill Italy with immigrants say!” Italy’s far-right interior minister Matteo Salvini, who has in the past publicly butted heads with Lucano, wrote on twitter.

What we are really talking about here is treason, and nothing short of the death penalty is an appropriate punishment for this crime against the ethnic Italian people.  By helping to flood Italy with non-Whites, Lucano is ensuring that future generations born in Italy will be mixed-race Arabs and Africans, who will have no ability to sustain the current level of civilization.  Italy will start to resemble North Africa within the next 25 years — and sub-Saharan Africa within 50 years.

This isn’t just a misguided form of liberal altruism; rather, it is an intentional act of treachery.  Clearly Lucano’s “partner” Tesfahun Lemlem is non-White, so to justify his own race-mixing, he wants to subject the entire country to the same subversive act.

If his arrest is to have any positive effect, he should be prosecuted to the fullest extent that the law allows — but he’s more likely to get a slap on the wrist.