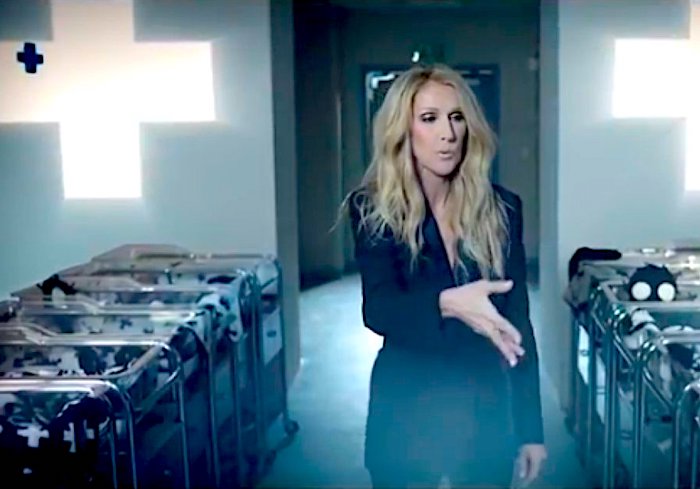 (Sorendreier.com) A new video promoting Celine Dion’s ‘gender neutral’ childrens clothing line has been released, which makes use of obvious satanic and illuminati symbolism, along with the message that “our children are not really our children”:

Dion partnered with Nununu’s alternative clothing calling themselves: CELINUNUNU. According to the website: “CELINUNUNU liberates children from the traditional roles of boy/ girl and enables younger people to grow on values of equality with the freedom strengthen their own power of personality based on mutual respect.”

Aside from the clothing being hideously ugly, occult themes on children is disturbing. The babies and children look sullen. Who would pay $77 for a baby blanket with skulls or $161 for a jacket that looks like a trash bag. And who wants a baby playsuit with skulls?

The Nununu line itself is extremely disturbing and strangely contains many identical styles as those supposedly with Dion’s collaboration. It appears they just grabbed a few things and threw her name in.

Nununu’s own line includes sheep with patches over one eye and cross bones, large Illuminati eyes and lots and lots of skulls. One pair of sweatpants has a number 3 on one knee and a 6 on the other. Three 6’s? Boys are dressed as ganstas and girls with “Ho!” emblazoned on shirts. Thinking perhaps I missed out on something, I checked both the Urban Dictionary and Meriam-Webster’s for the definition. “Ho: noun. alteration of whore. prostitute, whore, hooker, tramp… slang, often offensive.”

The catalogue scenes are creepy. One child is made up with a skull-like face and another as Edward Scissors Hand with dark eyes and long metal nails. There are doll’s heads with vacant expressions, skeletal hands forming the shape of a heart… you get the idea.

Some people don’t see the darkness that I see as blatant. Here are a couple of Twitter reactions: “Celebrity #fashion lines are almost a dime a dozen. But @celinedion’s #Celinununu is actually smart, fun, and backed by the right messaging for a change. I’m there!”

“How cool are Canadians?!! How cool is @celinedion for stepping up to the forefront with her new #genderneutral clothing line #celinununu #LGBTQtwitter”

Dion explained during an interview with CNN that the gender-neutral clothing line was inspired after taking her twin sons to Disney World and they wanted to meet princesses and Minnie Mouse. She took that as a cue that “they’re finding themselves.”

This video comes just in time to support California’s new educational initiative to address a  rampant problem among these Talmudic rabbis, but that shouldn’t be used to question their wisdom or authority on this subject.

The “rootless cosmopolitan elites” — also known as the “deep state” or more simply “the Jews” — understandably take this gender reassignment seriously, and their “gender police” in England are now knocking on people’s doors to make sure that they are using the correct pronouns and expressing the correct views about the social benefits of gender confusion.

But even if you have all your thoughts and pronouns correct, you still might offend a transgender patient just by having the wrong expression on your face when looking at them.

But not to worry, the jewish-controlled media features plenty of “experts” to help you become a better “citizen of the world.”