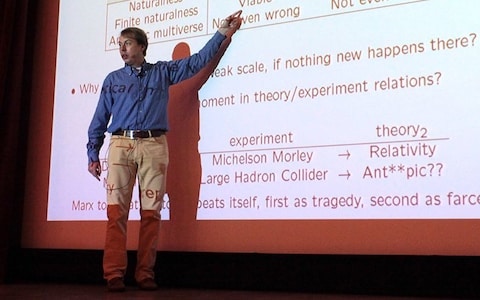 Professor Alessandro Strumia of Pisa University has been suspended for comments he made during a Cern conference in Geneva, claiming the historically-accurate fact that men invented and developed the field of Physics:

Prof Alessandro Strumia of Pisa University claimed during a seminar on gender issues in physics that male scientists were being discriminated against because of ideology.

Cern issued a statement on Monday suspending Strumia with immediate effect pending an investigation for his “unacceptable” presentation, which was “contrary to the Cern code of conduct”.

“Cern always strives to carry out its scientific mission in a peaceful and inclusive environment,” it said. However, attendees questioned why he was allowed to speak at all, given that his views are widely known.

Strumia defended his comments, telling the Guardian that his detractors were “trying to paint me as a monster who discriminates against women” and that his presentation of “facts” was in response to statements made about men discriminating against women.

He said data showed male and female scientists were equally cited in presentations, and that women were favoured when it came to hiring. “This is not the message they wanted [to hear] at this conference,” he said.

Strumia, who regularly works at Cern, said claims by a participant at the event that the sphere of physics was second only to the military for sexual abuse were “totally absurd”.

He said: “These people are so worried about problems that don’t exist. What I actually said has good purpose. We are not discriminating, women have been helped for years.”

Cern, whose director general is the Italian physicist Fabiola Gianotti, described Strumia’s presentation as highly offensive and removed the slides used in his talk from its website.

It said: “The organisers from Cern and several collaborating universities were not aware of the content of the talk prior to the workshop. Diversity is a strong reality at Cern and is also one of the core values underpinning our code of conduct. The organisation is fully committed to promoting diversity and equality at all levels.”

However, the slideshow was circulated online, with one sentence saying that prominent female physicists, such as Marie Curie, were “welcomed only after showing what they can do, got Nobels … ”

Strumia’s greatest heresy was to expose the fraudulence of the claim that there are no women in Physics because of “discrimination” by men.  There are few women in Physics because their brains are wired differently from men’s, and no amount of social conditioning will change that.  All IQ tests have shown that men have a significantly higher aptitude for the abstract sciences than women, which is why women tend to struggle in those fields, and why their drop out rate is so high.  Telling a young girl that she can be a Physicist if she “really wants to be” is a form of child abuse.

And Strumia is also telling the truth that political correctness now dominates the hall of academia even in the hard “objective” sciences.  To level the playing field, some colleges even allow female students more time to finish exams than the male students.  But these Affirmative Action programs can’t change reality — women and non-Whites are under-represented in Physics because they are biologically hard-wired differently, and there’s nothing offensive about that fact, unless your a radical nation wrecker who doesn’t believe in objective truth.