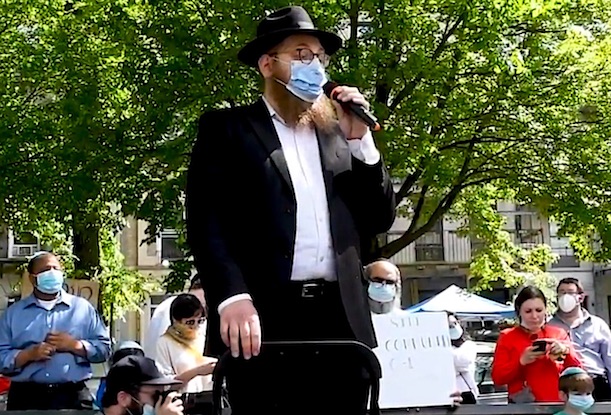 On Sunday, more than 100 people, including many Chabad-Lubavitch supremacist Jews, marched in the volatile Crown Heights section of Brooklyn allegedly to show support for the Black Lives Matter movement:

“This is such a blessing. I’ve been here through riots and we had different uprisings and different things that went on in the Crown Heights community between Blacks and Jews. This to me is, I’m almost choked,” said Felicia Gomes, 55, a lifelong Crown Heights resident after stumbling upon a Black Lives Matter solidarity march in her neighborhood organized by the community’s Jewish residents.

On Sunday more than 100 people marched through the heart of Jewish life in Crown Heights, past 770 (the worldwide headquarters of the Chabad-Lubavitch Movement) and along a major street to show their support for Black Lives Matters.

Carrying signs and chanting, rally organizers encouraged their fellow Chabadniks to stand up for Black Lives Matters saying it was a matter of Jewish law to do so.

“My heart also cries out as a Jew for a very specific reason. I’m a Lubavitcher, this is our neighborhood, the Lubavitcher Rebbe is sort of the spiritual leader here,” Ephraim Sherman, one of the organizers of the rally, told the crowd. “And he put a special emphasis on the Sheva Mitzvot B’nei Noach, the 7 laws that apply equally to all human beings. And one of those is establishing a justice system. Emphasis on the word justice.”

“And if an agent of the justice system can murder a person in cold blood that doesn’t just call out as a human issue, as an American issue, to me that calls out as a Halachic issue, a Jewish law issue. It should call out to every Jew,” he added.

On top of being home to the Chabad movement, Crown Heights is also historically a Caribbean, African-American neighborhood. Tensions boiled over in 1991 when the motorcade of Rebbe Menachem Mendel Schneerson accidentally struck 2 children of Guyanese immigrants, killing one. A three day riot ensued which left 2 people dead…

“I can’t even explain it. As a person who grew up in Crown Heights in 55 years I’ve never seen this. Thank you from the bottom of my heart,” said Gomes at the rally’s end.

Many Jews, of course, complain that Chabad Jews are not “real” Jews — that they are “extremist” Jews whose teachings are not based on “The Torah” but rather “The Tanya”.

What they don’t tell you is that by “The Torah” they really mean The Talmud, and in The Talmud you will indeed find many rabbinical opinions that clearly express the racial superiority of Jews to the animal-like “goyim”.

And considering that Donald Trump’s son-in-law, Jared Kushner, is a Chabad Jew, it would be disingenuous to claim that this is a radical “fringe” group.

So why are these Jewish supremacists suddenly supporting Black Lives Matter?

Is it antisemitic™ to ask, “How is it good for Jews?”

Chabad Jews want any new “racially sensitive” legal system that will be instituted to be based on their 7 Noahide Laws (which appear nowhere in the Bible and have nothing to do with Noah).

Among those Noahide laws is the death penalty for idolatry — and Chabad Jews, of course, consider Christianity to be idolatry.

These anti-Christ Chabad Jews have a lot in common with the Bolshevik Jews who murdered 60 million Russian Christians, and if they get their way, the genocide in Russia will be repeated in America.

And any Black or White BLM supporter who is foolish enough to believe that these Jewish supremacists, who see them as literally animals, are on their side is going to be in for a rude awakening.