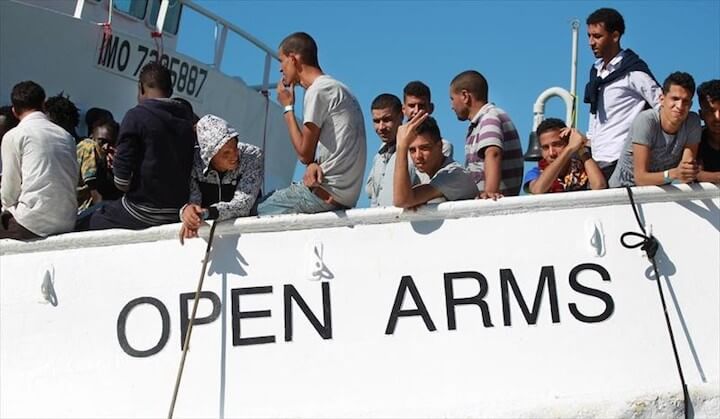 A “charity group” is now filing a charges against a private cargo ship for not rescuing fake African migrants. You can see below how the “left” is working hard to frame the trafficking of illegal African invaders into Europe as some kind of “rescue” mission – and if you don’t go along with this insanity, you will be charged:

The charity Proactiva Open Arms has filed a complaint on Saturday, including of involuntary manslaughter, with the Spanish police against a cargo ship.

It said, managers of the cargo ship failed to help migrants adrift on a destroyed dinghy in the Mediterranean.

The captain of the charity’s rescue boat said on Saturday he also plans to file a separate suit against the Libyan lifeguard.

“We have filed a complaint against the captain of the Triades (merchant ship) for failing to help and for involuntary manslaughter and we’ll also do it against the captain of the Libyan patrol boat, which is part of the Libyan coast guard, for failure to render aid and for homicide and we will do so against any other person who may have taken part either through action or omission”, said NGO Activa Open Arms founder, Oscar Camps.

The migrant rescue boat Open Arms docked in Spain on Saturday carrying the bodies of a woman and a four-year-old boy as well as one woman who was found alive floating on the remains of a dinghy off the coast of Libya last week.

Open Arms found itself at the centre of the European immigrant crisis beginning July when it rescued 60 migrants off Libya and brought them to Barcelona, Spain after being refused docking in Italy and Malta.

This is what it is coming to – so-called human rights charities suing governments for not rescuing African invaders and giving them a free ride to Europe.

Since when are private ships obligated to aid and abet in human trafficking?

These so-called stranded Africans floating in the Mediterranean are not there accidentally – they know full well that they have no chance of reaching Europe in these inflatable dinghies. They cast themselves afloat and wait to be picked up – and they know that Europeans have laws that force the ships to pick up anyone who is “distressed”.

It’s a complete scam, and this charity knows it.

And let’s not forget that this charity, Proactiva Open Arms, has been accused of being involved in human trafficking – they are not really “rescuing” any one with their boats. They are picking up Africans and ferrying them to safety in Italy or Spain – where they are neither expected or wanted, except by a few liberal radicals in the press. Proactiva isn’t motivated by truly caring for these African migrants – rather, they hate White Europe and are doing everything they can to destroy it through forced immigration.