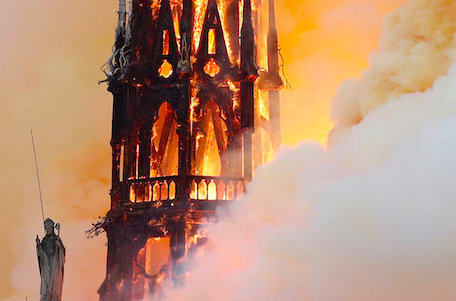 While Benjamin Mouton, the French Inspector-General for Historic Monuments and former Chief Architect of Notre Dame, was interviewed live on TV last Monday evening as the fire continued to burn the 850-year-old symbol of French culture and history, he explained why the “official” explanation of an “electrical fire” was impossible, stating:

“I don’t understand this at all. The fire’s spread is extremely curious. With really old oak like that, it’s super-hard, so you’d need a lot of smaller wood to first get the fire hot enough for the oak beams to burn.

In 2010 we replaced all the electrical wiring, so there’s no way this was sparked by a short-circuit. We put new wiring in place according to modern standards. And we went even further; we installed state-of-the-art fire protection and detection systems in the cathedral.

At all times, there are always two men on standby in the Cathedral, day and night, to go investigate anything the moment an alarm goes off, then if necessary to call the fire emergency services.

I am really stunned that this [the fire] has happened. It’s incomprehensible.”

“In 40 years of experience, I have never heard of a fire like this.

It would take a really combustible load at the start of such a fire for it to rapidly develop into the disaster we saw. Also, oak is a particularly fire-resistant wood.

The fire detection/protection system installed in the cathedral was of the highest level. It was a very expensive undertaking, but it enabled us to quickly ascertain whether a fire had started somewhere. Additionally, we had many old wooden doors replaced by fire-doors.

We also drastically reduced the number of electrical appliances throughout the building, and completely forbid them in the attic.”

To believe that Notre Dame burned the way it did because of a common “short circuit” is preposterous, and just as unlikely as 19 arabs with box cutters hijacked 4 commercial airliners and flew them into skyscrapers and the Pentagon, but no one ever got poor underestimating the gullibility of the television-addicted public.  When “experts” on t.v. are telling you exactly what happened as the event is still taking place, prior to any serious investigation, you can be assured that you are being lied to by someone with an agenda.

This fire was set a week before Easter, and before the jewish Passover, when Jews, pretending to be Israelites, celebrate the destruction of their enemies.  We heard this week from a prominent rabbi in Israel how the Talmud commands Jews to burn down churches, which has happened repeatedly in Israel, and throughout France leading up to the Notre Dame attack.  If any synagogue had burned down, do you think Jews would have settled for the explanation of “faulty wiring”?  No, there would have been a major investigation until the 14 year old “antisemite” who set the fire was arrested.