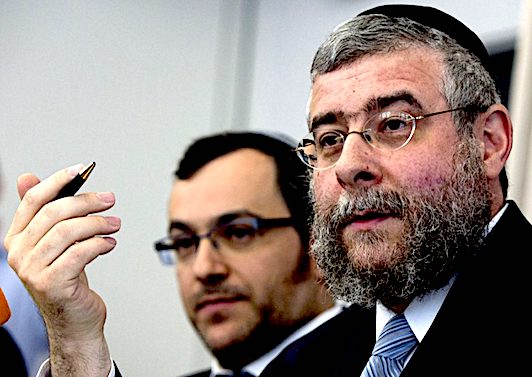 Moscow Chief Rabbi Pinchas Goldschmidt, president of the Conference of European Rabbis, hosted a high-level panel discussion at the Munich Security Conference titled “Combating hate crime” where he complained that people are using their new, unregulated freedom of speech in social media to say things he and his fellow Jews don’t like:

Together with the executive vice president of the World Jewish Congress Maram Stern, the panel was chaired by Chief Rabbi Goldschmidt and focused on the dangers caused by social media, including rampant anti-Semitism, far-right extremism and Islamophobia – all of which have found new life online.

A key agenda point addressed how social media channels spread messages faster and more efficiently than ever before and that more needs to be done to regulate these channels. The speakers concluded that tech giants are failing to deal with forms of racist hatred and the dissemination of extremist views across their platforms.

Speaking to the Munich Security Conference, Chief Rabbi Goldschmidt said: “The internet has created a vast arena in which those who hold a deep hatred towards religious groups, for instance, are able to share their views with others. More worryingly, they use a variety of platforms such as instant messaging to share dangerous tactics in their attempt to attack – both verbally and physically – those who do not subscribe to their way of thinking or choice of lifestyle. The evidence is clear: Hate and prejudice is commonplace on social media. The Halle synagogue on Yom Kippur and the mosque attack in Christchurch, New Zealand, are prime examples of digitally inspired attacks.”

Goldschmidt called on governments around the globe to regulate social media to avoid its misuse. During the debate, many agreed that technology has, to a certain extent, “broken” democracy. Peter Neumann, Director of the International Centre for the Study of Radicalisation (ICSR), King’s College London said that from a technological point of view “free speech actually is working against democracies” and that “hate speech, in particular, is a huge challenge for our democracies today.”

To combat this problem, Prof. Dr. Michel Friedman, lawyer, philosopher, and Executive Director of Center for Applied European Studies (CAES) pointed out that we first must discuss and understand when a hate crime begins and when it is necessary to respond. To counter this, the panel suggested copying the example of the digital fight against Islamic state. Here, major internet platforms joined forces to remove online jihadism from forums and accounts internationally.

Alex Samos, Center for International Security and Cooperation CISAC, Stanford University (U.S.A.) and former Chief Security Officer at Facebook argued that although there is a broad government coalition against the Islamic State, “there is no broad alliance of states against right-wing extremism.” He went further in saying that “if an Islamist contribution is censored, nobody cares. If they censor right-wing extremist politicians, that leads to a problem because some of them are sitting in governments.”

Jews have enjoyed a virtual monopoly on the press and media for the last 100 years, but the free internet changed all that, and they are panicking.  The last thing Jews want is an open, level playing field of public opinion because they know they will lose.

But we are dealing with a jewish definition of ‘democracy’ here.  And in a jewish form of democracy, any criticism of Jews is strictly forbidden, outlawed, and preferably a jailable offense.  Just ask the 66 million dead Christians from the Bolshevik Revolution.

As a great writer once observed, “Democracy is now currently defined in Europe as a ‘country run by Jews.’“

Which means that when Jews complain that their ‘democracy’ is being threatened by ‘free speech’, you can get a clear picture of what their version of ‘democracy’ is all about.

Clearly, the more Jews advocate for ‘regulations’ — that is, censorship and repression — the more likely they are going to create a violent ‘blowback’, which is exactly what they want so that they can further justify their repressive censorship.

This is textbook Bolshevism 2.0, folks.