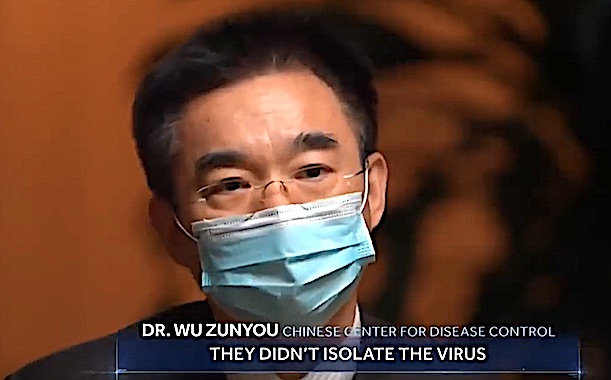 During a recent interview with NBC news — covering the recent WHO investigation into the origin of the COVID-19 “virus” in China — the leading epidemiologist with the Chinese government, Dr. Wu Zunyou, admitted that they — the Chinese — have never isolated the virus, which means that the supposed genome of the COVID-19 virus that Chinese researchers published in January 2020 — and which the West has allegedly used to make the COVID vaccines — is completely fraudulent:

NBC: Why hasn’t the data [on the origin of the virus] been shared?

Dr. Zunyou: They didn’t isolate the virus.  That’s the issue…

NBC: What about live animal samples?

Dr. Zunyou: It doesn’t tell you anything.  If they only tested positive.  I do not suspect that it’s coming from what we originally thought…

[The complete NBC report “Return To Wuhan: What Life Is Like One Year Later” can be watched here.]

The U.S. Centers For Disease Control, in their own published documents, admit they do not possess any examples of the isolated COVID-19 virus — and the same is true for Canada and the U.K.

Without an isolated virus — and without the genetic sequencing of the virus — it would be impossible for Moderna, Pfizer, or any other companies to actually make a vaccine to “combat” the virus — obviously.

Which begs the question — so what’s in these so-called “COVID-19 vaccines“?

Whatever is in the vaccines, they have already caused hundreds — if not thousands — of people, like a 78 year old California woman, who literally collapsed and died within minutes of receiving the vaccine at her doctor’s office — an amazing “coincidence” that is happening at an alarmingly high rate.

Remember, these hundreds of cases of death reported to the CDC’s VAERS system represent less than 1% of the actual numbers — of those injured or killed — according to a study commissioned by the FDA.

Doctors receive no training in medical school to recognize adverse vaccine reactions — because they are told — unequivocally — that all vaccines are “safe and effective” — and any doctors who question this paradigm can literally have their licenses revoked, like Dr. Paul Thomas in Portland, Oregon.

And even if doctors do suspect that a vaccine has caused the problems, they would be hesitant, for obvious reasons, to admit to their patients — or the government — that the vaccine that they promoted and administered caused the problems, especially if the patient died.

The same is true for all coroners — they are not trained to recognize vaccine-induced damage — all very convenient.