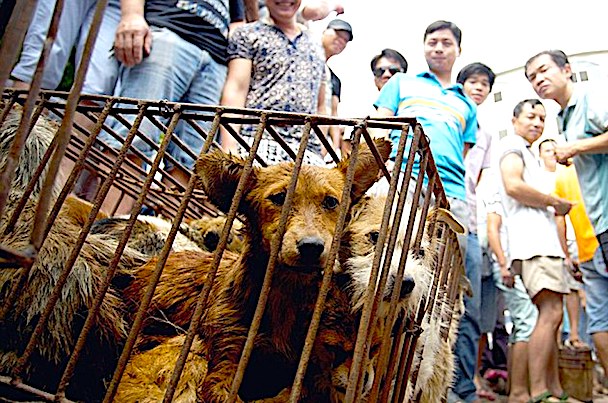 As part of a public relations stunt to clean up China’s image in the world, the city of Shenzhen has become the first in the country to ban the sale and consumption of popular dog and cat meat:

It comes after the coronavirus outbreak was linked to wildlife meat, prompting Chinese authorities to ban the trade and consumption of wild animals.

Shenzhen went a step further, extending the ban to dogs and cats. The new law will come into force on 1 May.

However, the practice of eating dog meat in China is not that common – the majority of Chinese people have never done so and say don’t want to.

“Dogs and cats as pets have established a much closer relationship with humans than all other animals, and banning the consumption of dogs and cats and other pets is a common practice in developed countries and in Hong Kong and Taiwan,” the Shenzhen city government said, according to a Reuters report.

“This ban also responds to the demand and spirit of human civilization.”

“This really could be a watershed moment in efforts to end this brutal trade that kills an estimated 10 million dogs and 4 million cats in China every year,” said Dr Peter Li, China policy specialist for HSI.

Eating dogs and cats has never been part of White western culture, and so we’ve never had to pass laws in order to get people to stop eating their own pets.

But Chinese people are fundamentally different, and the difference isn’t just skin deep.

They are a people who have traditionally accepted brutality and power as the only moral guiding force in their lives, as Ralph Townsend demonstrated in his classic 1933 book, Ways That Are Dark: The Truth About China, an absolute must-read for anyone who is interested in understanding what lurks in the hearts of the Chinese people.

Aptly, their society’s only guiding principle is ‘dog eat dog’.

Their indifference to cruelty and human suffering is a fundamental characteristic of their national ethos, and banning the eating of dogs and cats won’t change in any way who they really are.

After all, besides cats and dogs, there is virtually no living thing, apparently including human beings, that the Chinese people will not eat, which reveals that they still retain a primitive and rapacious ‘hunter-gatherer’ mentality.