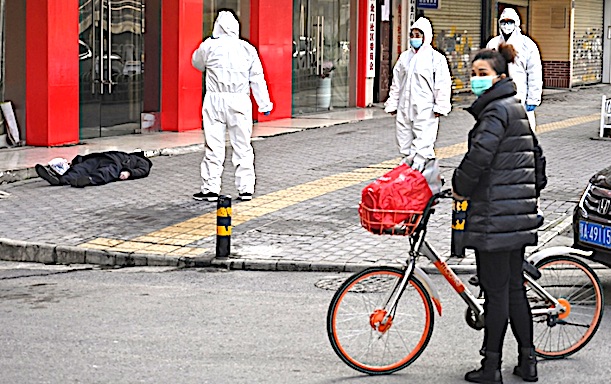 Despite declaring that they had successfully contained and ended the COVID pandemic without a vaccine, China is nevertheless rolling out a homegrown, experimental mRNA COVID-19 vaccine anyway for those who can afford it — but few are interested in taking it because of widespread concerns about its safety, having been rushed to the market without proper testing:

A vaccine developed by China National Pharmaceutical Group (Sinopharm), has been given to government officials, students, and migrant workers heading overseas, The Guardian newspaper reported in November.

But the vaccines — which retail at anything from 400 to 8,000 yuan — aren’t covered by medical insurance, and are priced beyond the reach of many people on middle-to-low incomes, RFA has learned.

There are also safety concerns given the speed with which an experimental vaccine has been rolled out, and following a string of public health scandals triggered by fake, out-of-date, and substandard vaccines that have sickened large numbers of people—many of them children—in recent years.

Beijing-based rights campaigner Guo Li said authorities at a residential complex in the southern Chinese city of Guangzhou had offered the jab to families living in the apartment block.

“[My friend who lives there] refused, however, because of all the issues there have been with vaccine safety, especially affecting children,” Guo said. “All of the other families there refused it as well.”

“They would rather take their chances and control their own fate.”

And a community volunteer in the central city of Wuhan surnamed Chen said the city government is charging 2,700 yuan per vaccination.

Chen said she and many other residents of the city are waiting to see if there are adverse effects before taking the plunge themselves.

“Someone on the inside told me not to try to get one, but to wait,” Chen said. “Even if you want a vaccine, you can’t get one without knowing someone.”

…Shanghai resident Xie Lijuan said there has been scant coverage in the official Chinese media about the immunization program.

“There hasn’t been much reporting on this,” Xie said. “Maybe it’s because of safety concerns.”

“They don’t know how safe this first batch is going to be,” Xie said…

The journal quoted Jin Dong-Yan, a virologist at the University of Hong Kong, as saying that the Chinese vaccines are likely safe, but that the companies will need to boost confidence in the vaccine’s safety and efficacy to sell it in large quantities overseas.

“Chinese state-run companies, like Sinopharm, can produce billions of doses. They have the capacity and expertise,” he says. “They need to have an open and transparent system, but they are not good at doing that,” Nature quoted Jin as saying.

According to Nature, Sinopharm’s vaccine has been widely deployed under emergency-use authorization, with full regulatory approval expected “very soon”.

UAE regulators said their approval of Sinopharm’s vaccines was based on company data stating that the efficacy of the two-dose vaccine was 86 percent in final-stage testing, including a trial in 31,000 people in the UAE…

As recently as 2018, the ruling Chinese Communist Party (CCP) detained 15 people and sent an investigative task force to the headquarters of vaccine-makers Changchun Changsheng in the northeastern province of Jilin in connection with fraud surrounding tainted or substandard vaccines.

Our western mainstream media has all but forgotten about the “pandemic” in China — the last thing they want is for Americans and Europeans to start thinking about how China ended its “pandemic” without a vaccine.

And COVID-19 allegedly hit the Chinese much harder — we all the saw macabre staged videos of people literally falling over dead in the streets — and the piles of corpses in the morgues.

Apologists will claim that because China is a totalitarian society, they could forcefully lock down the entire nation and contain the virus while the “free” West is unable to do that — which is false, because that’s exactly what we’ve done in the West — and to no avail.

And in states and cities with the most stringent lockdown orders, the virus has shown no signs of slowing down in its spread.

And the lockdowns don’t work because the COVID-19 virus is spread not by contact but by the bogus PCR tests — they can keep the pandemic “raging” for as long as they need in order to ratchet up the fear factor — simply by keeping the PCR cycling threshold at 35 or higher.

But unlike the West, communist China already has totalitarian control of its population — so they don’t need a bogus compulsory vaccination program — and associated tracking and compliance — to usher in that control infrastructure.

This is Bolshevism through vaccination.

Ironically, in communist, totalitarian China, citizens are still allowed to publicly question the safety of the new mRNA COVID vaccines — but “free” westerners will be “canceled” and accused of being “conspiracy theorists” if they so the same.

In the West, if you refuse to get the dangerous COVID vaccine — which has already made 3,500 people who did get it seriously ill, according to the CDC’s own published report — you will become a social pariah and be threatened with economic punishments, including loss of employment.

In other words, if you do not voluntarily participate in this agenda to bolshevize the West, you will find yourself in a social and economic gulag — where you will be encouraged to reconsider your selfish “fascist” tendencies.

The “price” we have to pay to maintain our “freedoms” in the West is to submit to compulsory vaccinations, contact tracing, mandatory face masks, and vaccine passports — without all those draconian restrictions, we won’t be allowed to have our “freedom” back.