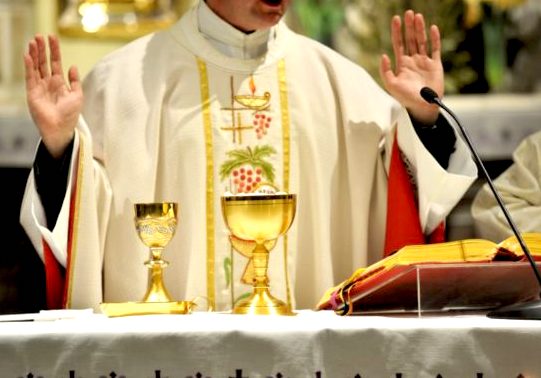 A self-described “Christian” refugee from Africa has confessed to German police that he brutally beat a pastor to death with a metal cross in a church:

A 27-year-old asylum seeker, who came to Germany because he heard Angela Merkel was admitting millions of refugees, has confessed to murdering a 54-year-old Christian pastor in Berlin by crushing his skull with a metal cross and shoving an umbrella down his throat.

In a written statement by his defense counsel, Loic Sindbad, 27, from Cameroon confessed to attacking the pastor with a metal cross in February, beating him on the head until he was unconscious and then ramming an umbrella down his throat.

According to the indictment, the pastor died of “massive skull injuries.”

Loic Sindbad, who came to Germany in 2014 as a refugee, told the court he was a Christian, but he also believes in voodoo, black magic and witchcraft.

“I believe in ghosts and witchcraft,” said Sindbad. He was convinced that his family had been cursed in Cameroon and gained asylum in Merkel’s Germany.

The following day, he visited the priest in the evening to seek help and to pray with him.

“I was scared and feeling like I was being persecuted.”

In prayer, he heard voices calling for the priest to be questioned. Then he started beating the pastor. The older pastor was unable to defend himself against 27-year-old Sindbad and called out in German for help.

Following his arrest Lois Sindbad has been placed in a closed, psychiatric institution. The trial will continue in the coming weeks.

Christian missionaries and pastors have been killed and even eaten ever since they began to attempt to bring the Gospel to non-Whites, and one would think that eventually they would have learned their lesson by now.  Nowhere in the New Testament is there an epistle to the Africans, Arabs, or Chinese, but that obvious fact has not deterred these pathologically messianic Christians from putting themselves in harm’s way time and time again.

The Christian experience in Africa is well-established — Africans give lip service to the Christian message, and then reinterpret it through their own native voodoo practices and superstitions, some of which include putting these Christians on their plates for dinner.  Once Christians come to terms with the fact that the faith is not for everyone, there will be far fewer casualties among well-meaning Christians, like this German pastor.  Not only that, Christians can put their energies into getting the message to the people for whom it was intended.