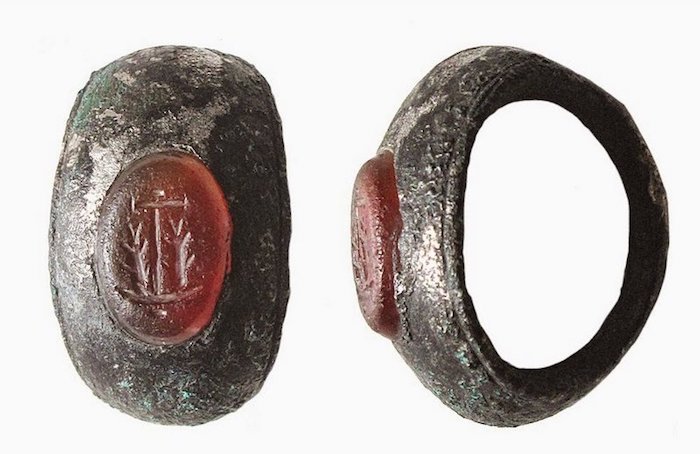 (Popular Archeology) During their excavation of a Roman settlement called “Pompeii of the North,” which dates from around 200 AD, archeologists in County Durham, England, unearthed a remarkable early Christian artifact — a ring with an engraved Cross:

Excavations at a Roman site in County Durham have revealed the ‘Pompeii of the north’, say archaeologists. The spectacular discoveries at Binchester Roman Fort near Bishop Auckland have uncovered some of the most well preserved remnants of an empire dating back some 1800 years ago, including one of the earliest pieces of evidence for Christianity in Roman Britain in the shape of a silver ring.

The archaeologists have also discovered a bath house with seven-foot high walls, which were once covered with brightly covered painted designs, the original floor, doorways and window openings, as well as an inscribed altar dedicated to the Roman Goddess, Fortune the Home-bringer.

Dr. David Mason, principal archaeologist, Durham County Council, said: “These findings are hugely significant as they are virtually intact and present a graphic illustration of life under the Roman Empire. They are so stunning and spectacular that we can claim we have our very own ‘Pompeii of the north’ right on our doorstep.”

The excavation project, now in its sixth year, is a joint venture between archaeologists at Durham County Council, Durham University, the Architectural and Archaeological Society of Durham and Northumberland land and several American universities.

Project coordinator, Dr David Petts, lecturer in archaeology at Durham University, said: “Our excavations have uncovered parts of one of the best preserved Roman buildings in Britain. The building itself and the wonderful array of artefacts we have recovered from Binchester give us an unparalleled opportunity to better understand life on the northern frontier in the Roman period.

“For example, the altar is a reminder that bath houses were about more than keeping clean and exercising and were actually social centres – a bit like our modern day leisure centres.

“The most unique feature of these remains is the sheer scale of their preservation. It is possible to walk through a series of Roman rooms with walls all above head height; this is pretty exceptional for Roman Britain.”

The altar has been inscribed by a retired trooper who served with a unit of the Spanish cavalry based at Binchester. The trooper described his rank as “architectus” and this is the only example from the whole of the Roman Empire, outside of Rome itself, which shows that architects were on the staff of auxiliary cavalry units and not just the legions of the Emperor’s personal protection unit, the Praetorian Guard.

Last year, a first year Durham University student working at Binchester found a 1,800-year-old carved stone head of what is believed to be a Roman god.

The Roman fort at Binchester lies above the River Wear just outside the town of Bishop Auckland in County Durham. Known to the Romans as Vinovia, it commanded the main road that ran from the legionary headquarters at York northwards to Hadrian’s Wall. It formed a key element of the complex frontier system that lay both sides of the Wall that marked the northern-most edge of the Roman Empire for nearly four hundred years. The fort itself was built to house a cavalry regiment in the early years of Roman control in Northern England. It housed troops from across the Empire, including Spain and Germany. It was not just a military site—a thriving civilian settlement (vicus) grew up at its gates.

What this ring proves is rather remarkable — that there were Christians among the Romans who conquered early Britain.

These Roman Christians pre-dated the formation of the Roman Catholic Church in the 5th Century.

To put this in perspective, this ring was created within the first 200 years after the Crucifixion.

On top of that, it would be another 300 years before England officially became a Christian nation under Queen Bertha in the late 6th Century.

Historians of Roman England emphasize its pagan character — yet rarely if ever discuss its early Christian influences.

It makes one wonder how many other early Christian artifacts have been overlooked by archeologists simply because they are taught that Christianity arrived in England only after the fall of Roman empire — and the disappearance of the Roman troops from English soil.