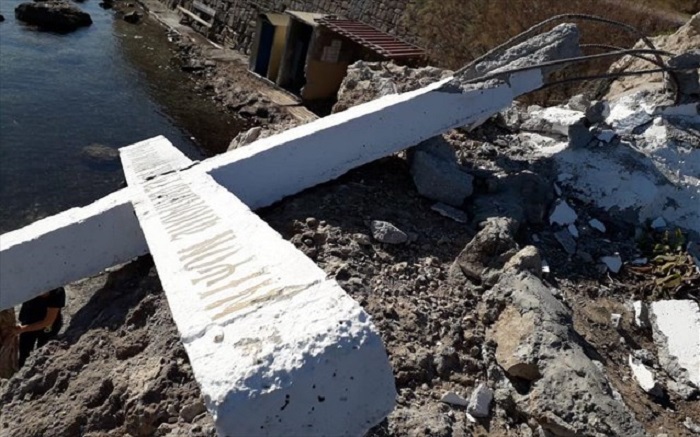 A Christian Cross has been removed at the request of a Coexistence Group on the island of Lesvos in Greece because it allegedly offended Muslim migrants in the area:

A huge cement Christian cross, which was built on the rocky shore of Apelli, under the castle of Mytilene in Lesvos, in honour of the people that have died swimming there has been pulled down as a co-existence group based on the island claimed it was offensive to migrants who are not Christian.

According to Lesvos News, the placement of the cross caused negative reactions from aid organisations and a letter was sent to the Harbour Minister of Lesvos and the Mayor of Lesvos, by a coexistence group in Lesvos, stating the Cross was placed there to prevent migrants from swimming.

“A few days ago they placed at Apeli of Mytilene a large cross, in order to prevent other people (refugees and migrants) from coming to swim. This act is illegal, unsightly (reminiscent of a grave) but mostly offensive to the symbol of Christianity, a symbol of love and sacrifice, not racism and intolerance.”

“Please we ask for you to get rid of this inappropriateness of a religious symbol in a swimming site and its conversion into a tool of aspiring crusaders.”

A few days after this, the cross was taken down overnight.

The announcement of coexistence has caused strong reactions from locals who believe it goes against the religious beliefs of the majority of the inhabitants on the island.

Of course, there’s nothing wrong with the cross being used as a “tool of aspiring crusaders”; if Europe had more “crusaders”, it wouldn’t be in the situation that it’s now in.  When a mosque is erected on Christian soil, no one is allowed to express their opposition without being smeared as “intolerant”.  But the Greeks don’t have the right to make Muslim invaders feel unwelcome.

These Muslim migrants complain about crosses in Christian lands because they know they can get away with that.  Go to the Middle East and start complaining about islamic symbols and see how long you live.  And they know they are hypocrites, but the ends justify the means when it comes to conquering Christian lands.  Like jewish communists, they come in and remove the crosses, then persecute anyone who expresses opposition.

Muslims learn quickly what their jewish puppet masters let them get away with.