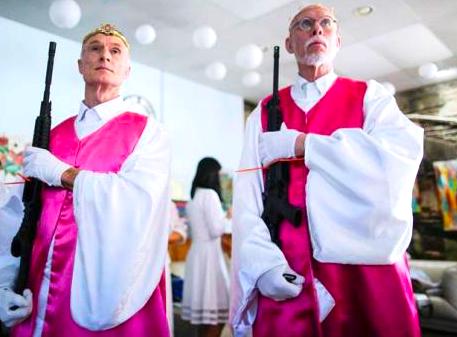 As the wake of the apparent mass shootings that killed 20 in El Paso, Texas and 9 in Dayton, Ohio over the weekend, Christian leaders, right on cue, are calling out “white supremacy,” offering encouragement, and “begging” for change:

Several of Christian leaders spoke against white supremacy after it was revealed the El Paso shooter was racially motivated against immigrants and Hispanics in his attack.

Shane Claiborne, an author and activist, according to Relevant, tweeted several thoughts on the need for reform. Claiborne wrote, “2 mass shootings in 24 hours. 20 dead & 26 injured in El Paso, TX. 9 dead & 16 injured in Dayton, OH. Let us pray for all those affected… and then let’s honor their lives by taking action to end gun violence. Another America is possible.”

He continued, “Saying that it’s ‘not the right time’ to talk about gun control after a mass shooting… is like saying it’s not right to talk about train safety after a deadly train wreck. #ElPasoThis is exactly when we need to talk about it.”

…Father James Martin argued that gun control is a pro-life issue, linking to an article in America Magazine that he wrote in 2012.

He wrote, “Pastors: Tomorrow at church, it would be a good idea to mention that your hispanic members and neighbors are loved and welcomed – that you care for them and will speak up for them when they are caricatured, maligned, and (as we saw today) targeted.”

He continued, “Racism, white nationalism, and white supremacy all make no sense if you are a Christian. Christians literally worship a dark-skinned, Jewish savior from the Middle East. Not only is racism sinful, it is remarkably stupid for anyone who identifies as a Christian.”

….A. Horton, a pastor in Long Beach and board member of W.A.M. tweeted, “People radicalize racist rhetoric. They write manifestos and mobilize to kill those they publicly proves (sic)to hate. These are not ‘lone wolves.’ These #massshootings are organized with target demographics in mind. When these manifestos outline the motive as #WhiteSupremacy, the church CAN’T be silent in calling this out! #WhiteSupremacistTerrorism. This doesn’t mean everyone of European descent is a White Supremicst (sic). But it does identify the system of hatred that is rooted in evil.”

Leaving aside the fact that eye witnesses who were actually in the Wal-Mart in El Paso claimed that there were three masked shooters dressed in black, we should find it curious that Bryan Crusius, the father of the alleged shooter Patrick Crusius, is a New Age guru who has a huge Star of David hanging in his home or office, which would suggest that Crusius may not be exactly White.  Obviously, the Daily Mail was concerned enough about the implications of this Star of David that they cropped it out of the photo in an article they ran on the father.

Another problem with the alleged shooter, Patrick Crusius, is that he is a dead ringer for Santino Legand, the alleged shooter at the recent Garlic Festival in Gilroy, California last week (see comparison below).  With all of these unresolved and unreported discrepancies floating around these events, Americans should make sure the events really happened before they demand or agree to draconian laws that will ultimately disarm them and make them criminal suspects just for being White.