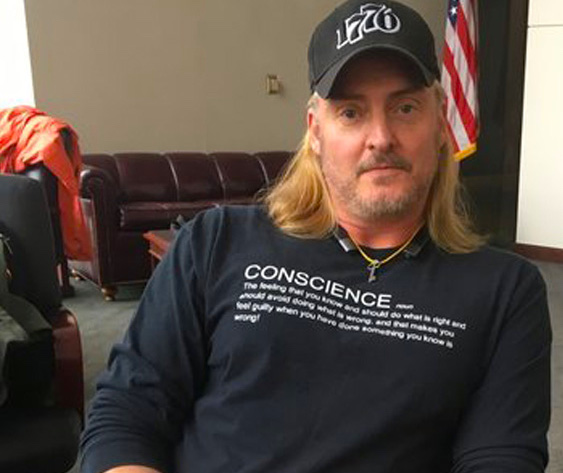 Michael Bowman of Columbia City, Oregon, a 53-year-old contract engineer, hasn’t filed a tax return since 1999 but said he’s been up front with the Internal Revenue Service, refusing to file a return or pay taxes without some accommodation afforded to him for his religious beliefs about abortion:

“First, I would love to pay taxes so as to have a normal life, however, our government is using the tax dollars to fund Planned Parenthood; which commits abortions – the death of the innocent,” Bowman told CBN News. “Apparently, a woman has the right to choose, but evidently, I do not. From a historical perspective, since I have been born, America has committed 55 million abortions; all in obscurity, and under the guise of ‘freedom of choice, liberalism, women’s rights, and progressivism.'”

Federal funds can’t legally be used to pay for abortions, but pro-lifers would like to see Planned Parenthood defunded because it is the largest abortion provider in the nation.

Bowman continued, “My conscience, which I am solely responsible for, does not allow me to contribute to abortion, and I feel I have a duty to stand up and question the morality of what our government has elected to do in this context; namely to force 150 million pro-life people like me, to sell their soul for a cheap bowl of soup, essentially flush their conscience and values down the toilet just to live a normal life or, face jail. You see, the Constitution grants certain abilities to the government, e.g. funding the military, but killing children is not a Constitutional backed, compelling interest of the government by any stretch of the imagination.”

Officials started garnishing Bowman’s wages from his bank account in 2012 to make up for unpaid taxes. He said he then began cashing his checks instead and kept a low bank balance to avoid penalties from the IRS.

Last week, a federal judge dismissed the tax evasion charge against him, saying the government failed to provide evidence that he tried to conceal or mislead officials.

He is quick to point out that he is loves his country and wants to do what is right. But he says doing the right thing in God’s eyes is most important.

“Unfortunately, most news reports got it wrong,” said Bowman. “My effort, my position is not about ‘beating the tax system.’ Instead, it’s about standing up, standing firm for my Constitutional rights, and getting the government to honor title 42 Chapter 21.b The Religious Freedom Restoration Act, so that I may live a peaceful life, and in the end face God, and hopefully have Him say, ‘Well done, good and faithful servant!’ ”

In the meantime, he is offering a very simple solution.

“All the government has to do is put a check box on the tax forms that says check here to support Planned Parenthood, and write in your donation amount,” explained Bowman. “Then, just like any church or charity, Planned Parenthood will be funded by those that have no problem with it, and the 150 million people like me that are pro-life, can pay their taxes and live knowing we kept our conscience clean, intact, and are at peace about not supporting the murder of the innocent! Think of it this way, if the government can force you to support abortion today, what will they do tomorrow?”

It is remarkable that in America, where over 60% of the population claims to be Christian of one sort or another, they have managed to get these same Christians to agree to finance abortion through taxation.  It has gotten so bad that even Catholic institutions like Notre Dame University, which receives Federal education funding, allows Planned Parenthood to operate on campus, and if they tried to block them, they’d have their Federal funding cut off.

And Bowman’s solution will never work, of course, because the Feds know full well that given the option to check off the Planned Parenthood box on their tax forms, the vast majority would not opt to.  We are given the option to fund the Presidential elections, but we have no choice but to fund abortion and every other social abomination that the government engages in.  If just a couple million Americans did what Bowman is doing, the IRS would be out of the abortion funding business very quickly, but that’s not likely to happen any time soon.