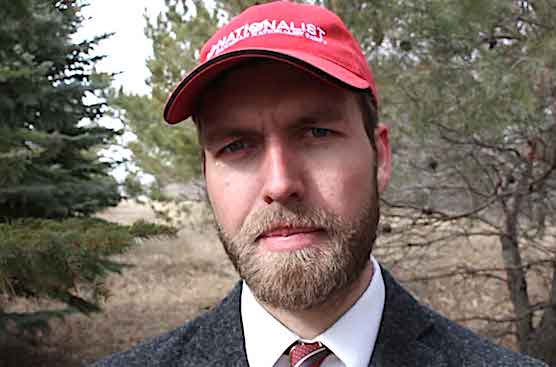 Travis Patron, a Christian Canadian politician — and leader of the Canadian Nationalist Party — posted a video on Facebook in which he explained that the people who call themselves “Jews” are liars and imposters who have infiltrated and destroyed the nation from within like parasites — and need to be expelled to save the country:

[Patron stated,] “The question remains, as it always shall: Is he a member of that ‘parasitic tribe?‘ Is he the ‘black sheep?’ A member of the so-called ‘inside manipulators?‘” Patron said in the Facebook video. “Everywhere these people go, they infiltrate the media, they hijack the central bank, and they infect the body politic like a parasite.”

“These people, they walk among us, and you could walk right past them on the sidewalk – and you wouldn’t think twice about it,” Patron states, afterwards giving a long pause for thought staring at the camera sternly. “While we focus our attention on our brothers and our sisters, who are with us not against us, these ‘black sheep’ hide, and they perpetrate, and they pull the strings. And they laugh about it. And they watch us. And we fight each other. And they profit from our wars. And they seek to control and demoralize us in every aspect of what we try to do.”

“…It’s their world, and we’re just a number to them,” he stated. “If they had their way, our entire way of life would be eradicated. They don’t like us. In fact, they despise us because of what we are. They cannot coexist with it.”

Patron then formulates a call to action, calling for the removal of Jews from Canada as per the general consensus in the CNP.

“What we need to do, perhaps more than anything, is remove these people, once and for all, from our country,” he concluded.

Once Patron’s speech was finished, the political faction shared a number of bible verses. One was Revelation 3:9, which states: “Behold I will make them of the synagogue of Satan, which say they are Jews, and are not, but do lie; behold, I will make them to come and worship before thy feet, and to know that I have loved thee.”

The video continues, noting other verses such as Ephesians 6:12, Matthew 10:16 and Job 9:24, which discuss how to recognize and fight evil as well as combating corrupt and shadow players in society.

While the flier touches on the same rhetoric shared in the video, it does have one addition: “The people we speak of are not truly ‘Jews.’ They are liars and deceivers attempting to shield themselves from criticism using a false identity. Let us be aware and expose them for what they are: a tribe of parasites.”

Once again, the Jerusalem Post which ran this story makes no attempt at refuting anything that Patron states — they merely dismiss him as an antisemite™ — because they can’t call him a liar.

In reality, there is nothing ‘extreme’ or radical about anything Patron has stated about today’s so-called Jews.

The Jews are NOT the same people as the original, legitimate “Jews” — or Judahites — from the Bible, the Israelite tribe of which Christ belonged.

Today’s Ashkenazi “Jews” are actually Khazarian converts to Babylonian Talmudism — of Turkic-Mongol descent, according to Jewish writers Arthur Koestler in his book The Thirteenth Tribe and Shlomo Sand’s book The Invention Of The Jewish People.

And because the New Testament clearly exposes the fake Jews for who they really are, today’s fake Jews want it censored and the ‘offensive’ and ‘antisemitic’ passages redacted.

So, for Patron and other members of the Canadian National Party is concerned: is it ‘hate speech’ in Canada to state the historical and biblical fact that today’s fake Jews are imposters who should be expelled from the country?

If the B’nai B’rith — Canada’s de facto Sanhedrin — has anything to say about it, Patron may soon experience what Andrzej Kumor recently went through — for merely stating facts that offended these Khazarians pretending to be Jews. 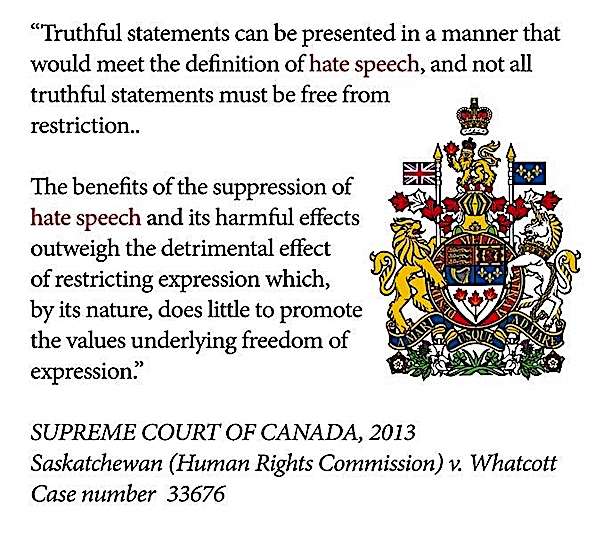