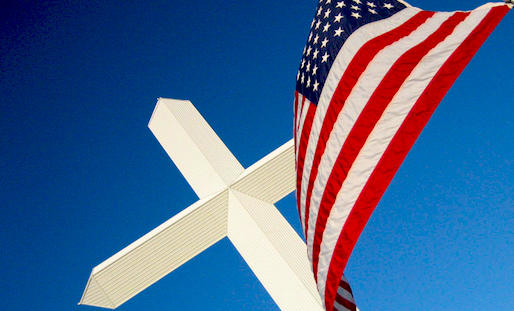 A new coalition of Left-leaning pastors, calling itself ‘Christians Against Christian Nationalism, has started a campaign warning American Christians against the ‘dangers’ of alleged rising ‘Christian nationalism’:

The coalition includes presiding bishop and primate of The Episcopal Church, the Rev. Michael B. Curry, who presided over the wedding of Prince Harry and Meghan Markle and advocates for same-sex marriage.

“As Christians, our faith teaches us everyone is created in God’s image and commands us to love one another. As Americans, we value our system of government and the good that can be accomplished in our constitutional democracy. Today, we are concerned about a persistent threat to both our religious communities and our democracy — Christian nationalism,” a statement from the group, Christians Against Christian Nationalism said.

The campaign was recently launched by the Baptist Joint Committee, a liberal faith-based group of attorneys, Capitol Hill insiders, ministers, mobilizers and scholars that advocate for religious liberty for everyone.

“Christian nationalism seeks to merge Christian and American identities, distorting both the Christian faith and America’s constitutional democracy. Christian nationalism demands Christianity be privileged by the State and implies that to be a good American, one must be Christian. It often overlaps with and provides cover for white supremacy and racial subjugation. We reject this damaging political ideology and invite our Christian brothers and sisters to join us in opposing this threat to our faith and to our nation,” the statement argued.

“Whether we worship at a church, mosque, synagogue, or temple, America has no second-class faiths. All are equal under the U.S. Constitution. As Christians, we must speak in one voice condemning Christian nationalism as a distortion of the gospel of Jesus and a threat to American democracy,” it added.

Not every Christian group shares those sentiments.

“Any group that equates worshiping at a mosque as the same as in a #church is NOT a #Christian group. Beware of wolves in sheep’s clothing,” the Holy Word of God Church stated in a reaction to a report on the campaign.

“This must be a Babylon Bee parody: a small gang of liberals (from churches that don’t have any followers) are warning people against ‘Christian nationalism.’ Ah yes, the great danger of our time for Christians,” she noted in a tweet.

So this ‘Christian’ group believes that all faiths are created equal and that America, contrary to every statement issued by the Founding Fathers, was never intended to be a Christian nation.  Because America has now been treacherously flooded with Jews, Muslims, Buddhists, Sikhs, African VooDooist, and atheists, any Christian who dares claim that America is still a Christian nation is ‘dangerous” and ‘anti-American’.

Why would any group of Christians not want to assert that America is better off as a Christian nation?  Clearly, only a group that in its heart does not believe that Christianity is any more valid than any other “belief system”, a group that no longer truly believes John 14:6, “I am the way, the truth, and the life: no man cometh unto the Father, but by me.”  Without Christianity as its foundation, America has no identity, nor would it ever have been created in the first place.  But now that jewish “pluralism” dominates the halls of power, Christianity has become the enemy of the State and must be silenced, with the help of so-called Christians themselves.