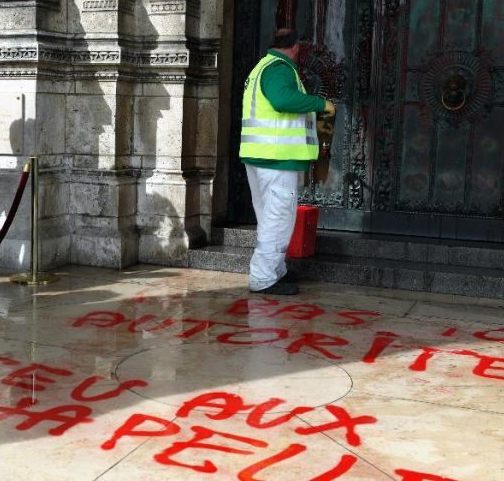 France has seen a spate of attacks against Catholic churches since the start of the year, vandalism that has included arson and desecration:

Vandals have smashed statues, knocked down tabernacles, scattered or destroyed the Eucharist and torn down crosses, sparking fears of a rise in anti-Catholic sentiment in the country.

Last Sunday, the historic Church of St. Sulpice in Paris was set on fire just after midday mass on Sunday, Le Parisien reported, although no one was injured. Police are still investigating the attack, which firefighters have confidently attributed to arson.

Built in the 17th century, St. Sulpice houses three works by the Romantic painter Eugene de la Croix, and was used in the movie adaptation of The Da Vinci Code, by Dan Brown.

Last month, at the St. Nicholas Catholic Church in Houilles, in north-central France, a statue of the Virgin Mary was found smashed, and the altar cross had been thrown on the ground, according to La Croix International, a Catholic publication.

Also in February, at Saint-Alain Cathedral in Lavaur, in south-central France, an altar cloth was burned and crosses and statues of saints were smashed. The attack prompted Lavaur Mayor Bernard Canyon to say in a statement: “God will forgive. Not me.”

And in the southern city of Nimes, near the Spanish border, vandals looted the altar of the church of Notre-Dame des Enfants (Our Lady of the Children) and smeared a cross with human excrement.

…The Vienna-based Observatory of Intolerance and Discrimination Against Christians in Europe, which was founded in cooperation with the Council of European Bishops Conferences (CCEE) but is now independent said there had been a 25 percent increase in attacks on Catholic churches in the first two months of the year, compared with the same time last year.

Its executive director, Ellen Fantini, told Newsweek that while in many cases the motive for the attacks was not known, France faced growing problems with anti-Christian violence, especially by anarchist and feminist groups.

“I think there is a rising hostility in France against the church and its symbols,” but “it seems to be more against Christianity and the symbols of Christianity.

“These attacks are on symbols that are really sacred to parishioners, to Catholics. Desecration of consecrated hosts is a very personal attack on Catholicism and Christianity, more than spray-painting a slogan on the outside wall of a church.”

She said that while France had a long tradition of secularism, it was seen as a culturally Christian country, and so any “attack on the church as a symbol of religion was also an attack on authority and patrimony.

Sure, these attacks on churches were carried out by “feminists” who are rebelling against the “patriarchy”.  Who would believe such nonsense?  And where is the jewish ADL to denounce these obvious “hate crimes” against the Christian faith?  Will the French government provide armed guards to protect the churches and congregants, or do you have to be a jewish synagogue to receive that kind of protection?  And are these attacks the beginning phase of pogroms against Christians that will ultimately lead to them being rounded up and put in gas chambers disguised as showers?

The police, no doubt, know exactly who is responsible for these attack: migrant Muslims, Africans, and radical antifa among the Yellow Vests.  When some bacon is left on the front steps of a mosque in Paris, the thought police come out in full force to find the perpetrator of the “hate crime,” but when Christians are attacked, the “motivation” of the attack remains “unknown”.  Why is no one concerned that these acts of vandalism will ultimately incite physical violence against Christians?  Perhaps the real concern is that these attacks won’t lead to further violence against Christians.