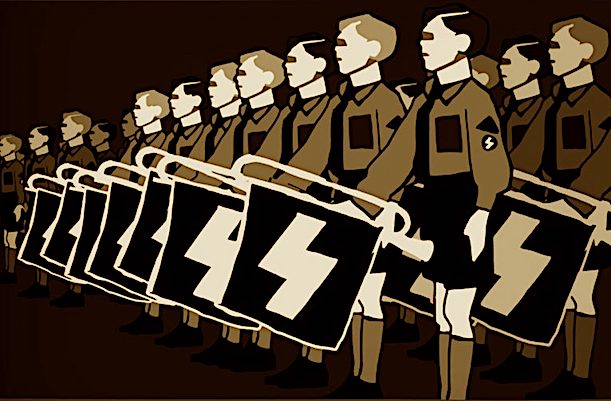 Jewish supremacist groups such as the ADL and WJC have been in high gear lately trying to convince the world that a shadowy international network of ‘White supremacists’ likened to ISIS and Al Qaeda is ‘conspiring’ to target Jews and other people of color, but apparently the ‘scariest’ bogeyman they’ve come up with so far is a 13-year-old boy from Estonia:

A 13-year-old boy in Estonia was a key figure in an international neo-Nazi group that has been linked to plots to attack a Las Vegas synagogue and detonate a car bomb at a major U.S. news network, the Associated Press reported.

The boy, who called himself “Commander” online, was a leader of Feuerkrieg Division, though severed ties with the neo-Nazi group after authorities in Estonia confronted him earlier this year, according to police and an Estonian newspaper report.

Harrys Puusepp, a spokesperson for the Estonian Internal Security Service, told the AP that police “intervened in early January because of a suspicion of danger” and “suspended this person’s activities in” Feuerkrieg Division.

“As the case dealt with a child under the age of 14, this person cannot be prosecuted under the criminal law and instead other legal methods must be used to eliminate the risk. Cooperation between several authorities, and especially parents, is important to steer a child away from violent extremism,” said Puusepp.

While the spokesperson did not explicitly identify the child as a group leader, leaked archives of online chats by Feuerkrieg Division members show that “Commander” referred to himself as the founder of the group and hinted to being from Saaremaa, Estonia’s largest island.

A report published last week by the Estonian newspaper Eesti Ekspress said Estonian security officials investigated a case involving a 13-year-old boy who allegedly was running Feuerkrieg Division operations out of a small town in Estonia. According to the newspaper the group has a “decentralized structure,” and while the boy cannot be considered Feuerkrieg Division’s leader, he was certainly one of its main figures.

So this 13-year-old isn’t even the alleged ‘leader’ of this nebulous group after all — that he allegedly referred to himself as ‘Commander’ is meaningless, as any army can have hundreds of ‘commanders’ depending on the size.

And there seems to be no evidence connecting this specific child to the alleged bomb threat to the synagogue in the U.S.

Just how ‘dangerous’ is a group of internet ‘warriors’ whose ‘leader’ is a 13-year-old-boy living with his parents on an island off the coast of tiny Estonia?

But, hey, if you want to scare Jews, make sure you name your ‘terror’ group after some obscure WWII German army unit — how clever.

Are Jews around the world resting more easily now that they know this ‘menace’ has been grounded by his parents?

It seems that the jewish supremacist groups whose job it is to make sure Jews everywhere remain afraid are running out of ideas — this pathetic story is truly a new low.

The good news, though, is that this story confirms recent surveys which show that jewish Holocaust propaganda is not having the desired effect on young people that it used to — perhaps learning that the Holocaust wasn’t exactly what it was advertised to be is what got this young boy interested in the so-called ‘far right’ in the first place.