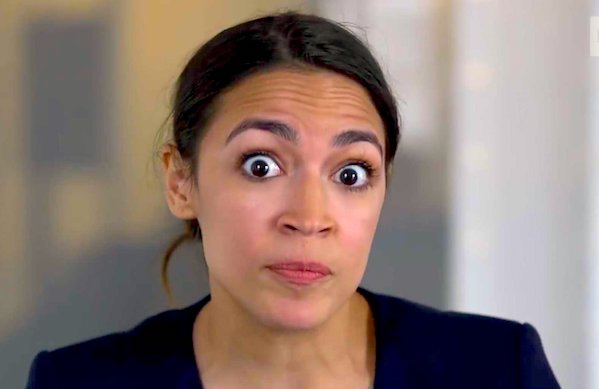 Since no one outside the radical Left takes climate change as a “science” seriously, communist Congressional candidate Alexandria Ocasio-Cortez ramped up the fear propaganda by comparing it to the Nazi takeover of the world:

“So we talk about existential threats, the last time we had a really major existential threat to this country was around World War II,” the Democratic Socialist told a crowd at a campaign event on Friday. “And so we’ve been here before and we have a blueprint of doing this before.”

What we did was that we chose to mobilize our entire economy and industrialized our entire economy and we put hundreds of thousands if not millions of people to work in defending our shores and defending this country,” the 29-year-old stated. “We have to do the same thing in order to get us to 100 percent renewable energy, and that’s just the truth of it.”

Ocasio-Cortez, known for her progressive views, has made headlines since pulling off a surprise win over Rep. Joe Crowley (D-NY) in the state’s 14th Congressional District primary in May.

The 29-year-old has campaigned with Bernie Sanders this year, on a drive to advance far-left candidates, but refused on Thursday to endorse his possible candidacy in the 2020 presidential race. Sanders also declined to endorse Ocasio-Cortez in the battle against Crowley – even though she’d worked on his 2016 campaign.

Sanders isn’t the only Democrat to refuse to endorse the progressive candidate, as her defeat of Crowley sent shockwaves throughout the Democratic party. Her name was left off a list of 81 candidates endorsed by former President Barack Obama in August, though an expanded version of that list –published earlier this month– includes her name.

Ocasio-Cortez is campaigning on a platform of Medicare for all, housing as a human right, stricter gun control, criminal justice reform, and for the Immigration and Customs Enforcement Agency (ICE) to be abolished.

If Ocasio-Cortez is victorious in November, she will be the youngest woman to be elected to Congress.

Cortez has obviously been coached by her jewish puppet masters, but she’s clearly not a quick study.  The “existential” threats that Israel bemoans everyday — like Iran and Iraq — are not actual threats but rather “hypothetical” or “what if” threats.  Whereas the Nazis were real threats to the Jews, which is why they needed to be destroyed with extreme prejudice.  Perhaps, then, what Cortez is trying to convey is that climate change is a threat only in the minds of Jews, who are the biggest promoters of this “existential” and non-scientific concept.  But why is climate changes especially threatening to Jews?

From her garbled campaign rhetoric, Cortez also seems to be suggesting that if we don’t do something about climate change now, we will be smeared as Nazi appeasers like Neville Chamberlain.  If climate change isn’t dealt with right now, there will be six million Jews herded into gas chambers in the next few years.  And if you don’t want the blood “another” jewish genocide on your hands, then you should vote for Cortez, or something like that.