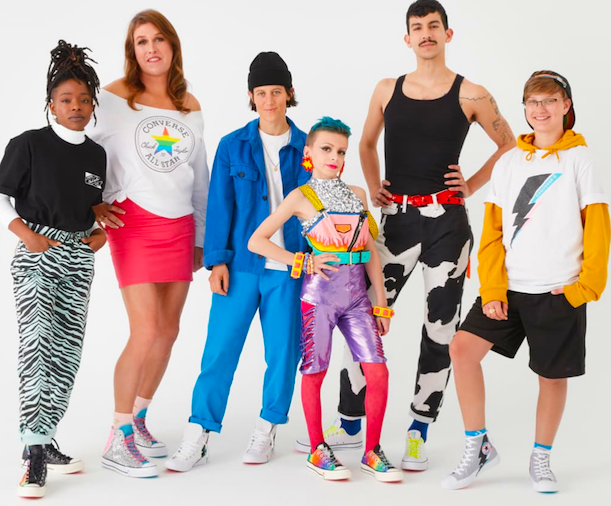 Iconic Chuck Taylor All-Star sneakers are as American as mom and apple pie, which is why its new “socially-progressive” parent company, Nike, is now using their appeal to promote subversive sodomy and transgenderism to children:

What started as a rebellious fight for equality has since grown into a loud, proud assertion of true self-expression. Celebrate the 50th anniversary of Pride with a glitter-dipped collection of parade-worthy sneakers, including our first-ever trans flag design. Because equal rights are for everyone.

Converse is committed to supporting movements for positive social change and amplifying youth voices as they spark progress to build the future they believe in.

In celebration of Converse’s annual Pride collection, which started in 2014, contributions are supporting longstanding local and global partners, including It Gets Better Project and OUT MetroWest.

We asked our friends – some old, some new – to share their thoughts on Pride. Click into each photo to learn more about them, their message and their favorite pieces from our 2019 Pride Collection.

Let’s spread a message of love together and shout a little louder.  These statements of hope are your to download, save, share or print.

The real Chuck Taylor, whose name adorns each pair of these shoes, would be rolling over in his grave if he could see how Nike, the parent company that now owns Converse, is cynically marketing sodomy to children using his iconic American shoes.  But this really shouldn’t surprise us anymore as within the last ten years, America’s largest and most “conservative” corporations have gotten behind the promotion of sodomy, transgenderism, all forms of sexual deviancy.

But like the Boy Scouts and every other iconic American institution, these sneakers have become vehicles of subversion and demoralization.  No one bats an eye when a shoe company uses a ten-year-old autistic “drag queen”, aka “Desmond Is Amazing”, to promote this degeneracy.  Had Converse tried this 20 years ago, the company would have been bankrupted by the public outcry by Christians, but today, Americans just shake their collective heads and hope that by ignoring it that it will just go away.  It’s not going to just “go away” as the campaign against “pedophobia” will heat up.