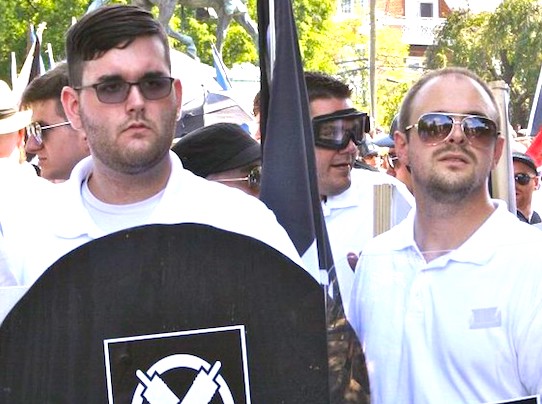 James Fields, the self-avowed white supremacist who plowed his car into counter-demonstrators opposing a white nationalist rally in Virginia two years ago, killing one person and injuring dozens, has asked a judge for mercy and a sentence shorter than life in prison because he grew up traumatized by his jewish family members:

Lawyers for James Alex Fields Jr., 22, said in a sentencing memo submitted in court documents Friday that the defendant should not spend his entire life in prison because of his age, a traumatic childhood and a history of mental illness. Fields pleaded guilty to federal hate crimes in March and is set to be sentenced on June 28.

“No amount of punishment imposed on James can repair the damage he caused to dozens of innocent people. But this Court should find that retribution has limits,” his attorneys wrote.

But prosecutors countered that the avowed anti-Semite and Adolf Hitler admirer has shown no remorse since he drove the car into the counter-demonstrators on Aug. 12, 2017, killing anti-racism activist Heather Heyer and injuring others protesting against the white nationalists.

The attorneys for Fields said that giving him something less than a life sentence would be akin to an “expression of mercy” and a “conviction that no individual is wholly defined by their worst moments.”

But prosecutors said Friday that Fields deserves a life sentence, adding that would help deter others from committing “similar acts of domestic terrorism….”

Under a plea deal, federal prosecutors agreed not to pursue the death penalty against Fields. The charges he pleaded guilty to call for life in prison under federal sentencing guidelines.

Fields was convicted in December in a Virginia court of first-degree murder and other state charges for killing anti-racism activist Heather Heyer and injuring others who were protesting against the white nationalists.  Sentencing on the state charges is scheduled for next month.

In Friday’s memo, Fields’ attorneys highlighted his difficult upbringing and history of mental illness, but many of the details were redacted from public viewing. He was raised by a paraplegic single mother and suffered “trauma” by growing up knowing that his Jewish grandfather had murdered his grandmother before committing suicide, his lawyers said.

Prosecutors focused on years of documented racist and anti-Semitic behavior by Fields, which they said included keeping a picture of Adolf Hitler on his bedside table.  They also said in court documents that he was recorded on a jail phone call making disparaging remarks about Heyer’s mother as recently as last month.

Prosecutors also said that while Fields has a history of mental illness issues, it doesn’t excuse his behavior in a way that would require a lenient sentence.

James Fields is jewish, a fact that the jewish-controlled media conveniently side-steps because it does not conform with the false narrative they are constructing about the “threat” of White supremacy in America.  Having one or two jewish grandparents is enough to qualify you for citizenship in Israel, so let’s not split Talmudic hairs here about whether or not James Fields is “really” a Jew.   His 23AndMe results would light up like a Hanukkah Bush for Ashkenazi ancestry.

And so it appears Fields was merely playacting as a “White” supremacist, just as was Frank Collin, the jewish pedophile who led the infamous “Nazi” parade in Skokie, Illinois in 1977.  Jews themselves are aware that they have a much higher incidence of mental illness and sexual confusion than the rest of society, and both Fields and Collin prove the point.  Both came from race-mixed families and thus inherited proclivities toward mental illness and identity crisis, which manifested as idolatry of dead Nazis who haunt the daily lives of average Jews worldwide, even to the point of violent fantasies of vengeance: