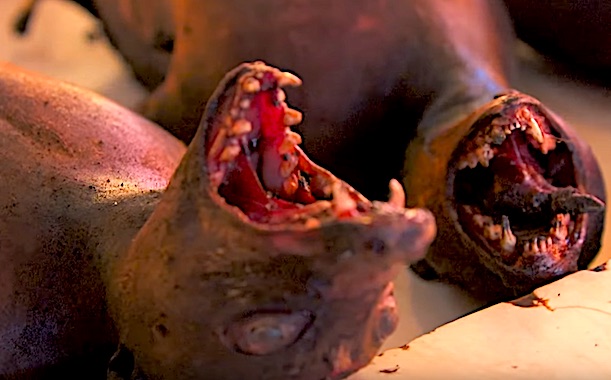 The Chinese food market in the city of Wuhan, China, which advertises live koalas, snakes, rats and even wolf pups for locals to cook and eat, came under scrutiny on Wednesday after Chinese officials said the coronavirus may have originated in a wild animal sold at the food emporium:

The [The Huanan Seafood Market] has since been closed and has been labelled ‘ground zero’ by local authorities.

The highly-contagious virus has killed 17 people and infected hundreds in China, South Korea, Japan, Thailand, Hong Kong and the US.

A list of prices for one of the businesses operating at the market showed a menagerie of animals available for sale including live foxes, crocodiles, wolf puppies, giant salamanders, snakes, rats, peacocks, porcupines, koalas and game meats, according to the South China Morning Post.

The food menu shows a price of 70 RMB for koala meat.

‘Just took a closer look at the viral wild animal menu – they even eat Koalas’, one wrote on Chinese language site, Weibo.

There are 112 live animals and animal products on the list.

…Gao Fu, director of the Chinese centre for disease control and prevention, said in Beijing on Wednesday that authorities believe the virus likely came from ‘wild animals at the seafood market’ though the exact source remains undetermined.

The reason that the Chinese will literally eat anything they find is that they, like Africans, never, as a people, became a fully agricultural society — which means that they’ve never truly become a civilized people.

If you truly want to understand the darkness in the hearts of Chinese people, you have to read Ralph Townsend’s 1933 classic book, Ways That Are Dark: The Truth About China.

Forget about their alleged “high IQs” you hear so much about from White Nationalists who attempt to rationalize their Asian girlfriends.

They use their IQs to steal our inventions and poorly reverse engineer what they steal.

They do not belong in our countries — they belong in China among like-minded people.

God put them there for a reason with a Great Wall to keep them in, not keep their enemies out.