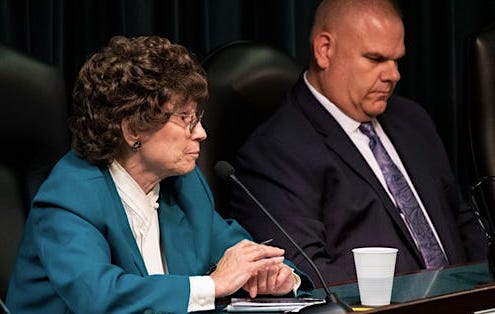 (WXYZ Detroit News) Jean Cramer — a candidate for city council in Michigan — “shocked” a public forum when she said she wants to keep “Marysville a white community as much as possible“:

Jean Cramer made the comment Thursday in response to a question about diversity in Marysville, a city in St. Clair County, 55 miles (88 kilometers) northeast of Detroit. The Times Herald in Port Huron says she’s one of five candidates running for three council seats in November.

After the forum, Cramer told the newspaper that she’s not “against blacks” but believes married couples “need to be the same race.”

Mayor Dan Damman, who isn’t running for re-election, says Cramer’s comments were “vile” and “jaw-dropping.” Council member Paul Wessel says Marysville is open to anyone who arrives in the city.

Any of the White people in Marysville who pretend to be “shocked” by Cramer’s remarks are hypocrites — they all know that the moment when Marysville becomes “too diverse”, they will start selling their homes in this once quiet and safe city and move away to some whiter place.

Of course, what Cramer stated about race mixing is also true: the first law of the Bible is indeed “kind after kind,” and race mixing is a violation of God’s law, but no one who is “progressive” or “enlightened” reads the Bible nor gives it any credence.

And it’s only “evil” White people like Cramer who want to live among themselves and don’t want to race mix.

If the voters of Marysville had any common sense, Cramer would win this election in a landslide, but more likely they will vote for their own destruction.