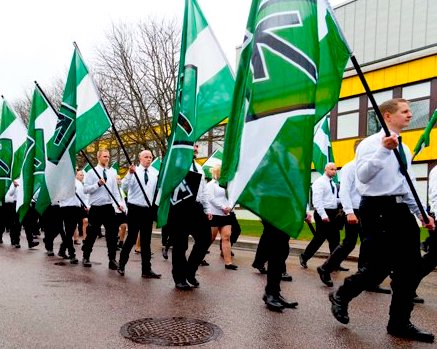 A judge in Oulu, in north west Finland, declared that the words “Nazi” and “racist” were “insults” (in literal translation “barking words”) and that if you use them against somebody, even if they are in your view empirically accurate, you must pay a fine:

Cllr Junes Lokka, the nationalist independent councillor who single-handedly unearthed a Muslim refugee grooming gang who had raped at least 29 underage Finnish girls in the last year, something unreported by the MSM until pressured by him , last month sued a smug, leftist journalist called Johanna Vehkoo. Vehkoo, who regularly expounds her Multiculturalist dogma in Finnish national newspapers, had become upset in 2018 because Lokka, who livestreams much of his campaigning, was insistently filming her. In a subsequent public Facebook post, she labelled the half-Finnish and half-Moroccan councillor a “racist”, a “Nazi” and a “Nazi clown.”

Turning Finland’s leftist-supported anti-free-speech laws against Vehkoo, in March, Lokka sued her for the “honour insult” (this is a crime in the land of sauna!) of calling him a “Nazi”, a “racist” and a “Nazi clown.” Vehkoo fought the case, arguing that Lokka was a “Nazi” and a “racist,” because, for example, he had met Jared Taylor and because Wikipedia kind of said he was.

The judge ruled that this was irrelevant. She was guilty of using insulting language. He imposed a fine of “15 day’s salary” on her, forced her to pay Lokka 200 euros and compelled to pay Lokka’s 6000 euro legal fees. [Toimittaja Johanna Vehkoo sai rikostuomion Junes Lokan kunnian loukkaamisesta, by Solmu Salminen, Ilta-Lehti, April 12, 2019]

The Finnish left are in uproar, even Vehkoo’s lawyer said she just couldn’t believe it. Popular tabloid Ilta-Lehti promptly editorialised “You should be able to call Nazis Nazis and Racists Racists”. [Pääkirjoitus: Natsia pitää voida sanoa natsiksi ja rasistia rasistiksi, Ilta-Lehti, April 12, 2019] seemingly forgetting that Ilta-Lehti also reported on Friday that Lokka was to be prosecuted for uploading onto YouTube a video of a Helsinki rally in which people supposedly broke Finland’s “hate speech” laws by speaking a bit too directly or truthfully about immigrants. [Junes Lokka nyt itse syytteeseen kunnianloukkauksesta – tekovälineenä Youtube, by Aleksanteri Pikkarainen, Ilta-Lehti, April 12, 2019] Naturally, there was no editorial condemning this. The irony is surely lost on no-one that “#Sanavapaus” (Free speech) is now trending on Finnish SJW Twitter accounts.

In effect, the Friday judgement means that if leftists smear nationalists as “racist” or “Nazi” (these being their main means of debating ideas with which they disagree) then there is a realistic possibility of them ending up with a heavy fine. It will have a “chilling effect” on the enemies of freedom, far more chilling that the Finnish winter.

Liberals are always shocked to discover that there are intelligent, well-informed people who disagree with them.  Liberals have become so fragile that if someone they don’t like gets elected President, they can become depressed or even suicidal.  This phenomenon makes sense when you consider that the most wealthy and powerful liberals in the world believe that anyone who doesn’t believe all children should be adopted by homosexuals and undergo sex change operations is a ‘Nazi’.

If Finns can no longer blame ‘Nazis’ or ‘racists’ for all the problems in society, who will they blame?  The logical answer is the Jews, of course, and that’s the problem.  If people aren’t constantly reminded that there are crypto-Nazis in every woodpile, secretly planning “another” so-called Holocaust, then they just might start investigating a more likely cause of some of their social ills.  Not to worry, however: surely a couple phone calls from the chief rabbi of Finland will ensure that “Finns” will continue to enjoy their “constitutional right” to smear their political opponents as ‘Nazis’ and ‘racists’.