‘Creepy’ Joe Biden Brags that If He Weren’t Catholic, He’d ‘Convert’ to Judaism 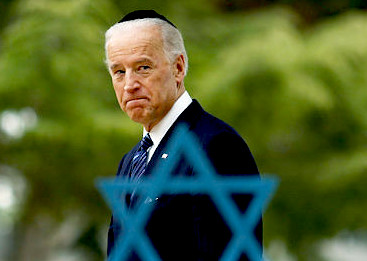 As Joe Biden announced his candidacy for President in 2020, the jewish press is gushing over his long track record of pandering to powerful jewish interests, and he has a large collection of yarmulkes to prove it:

Joe Biden, a born and raised Roman Catholic who likes to cross himself when making a point, knows what faith he would be if he were ever overcome with doubt about his own.

“If I’m going to switch, I know where I’m going,” the former vice president said in 2016 at an Ohio political event when someone in the audience called him a “mensch.” Biden went on to describe the pile of yarmulkes he had accumulated from attending Jewish events.

Goodness knows, he’s been collecting them for a while, and his Jewish ties run deep: One of his first overseas visits in his long career as a senator was to Israel, on the eve of the 1973 Yom Kippur War.

Which is all the more remarkable considering that Biden represents a state, Delaware, with a Jewish population estimated at 15,000.

How deep is Biden’s Jewish record? So deep that it was hard to pick just five Jewish things to know about him.

Here are his greatest hits, sure to be repeated once Biden, 76, announces on Thursday that he is entering the stakes for the Democratic presidential nomination.

…Biden has three children who grew to adulthood. (His first wife, Neilia, and a baby daughter, Naomi, died in a car crash right after his 1972 election to the Senate.)

“By the way, I’m the only Irish Catholic you know who had his dream met because his daughter married a Jewish surgeon,” he said at that 2016 Ohio political event.

All these anecdotes about how sympathetic Biden is to Jews and Israel seem like canned embellishments that are just too good to be true, and any Jew who believes his tall tales deserves to be lied to.  Sure, Joe, an Irish Catholic family discussing the Holocaust around the dinner table in the 1950s?  Talk about “revisionist history”, the elderly Biden will soon be claiming his father rescued Jews directly from the “gas chambers” in WWII, or that he worked on a kibbutz during a summer in college.

And sure, Joe, every father fantasizes about their White Christian daughter marrying a jewish doctor, preferably a proctologist or a plastic surgeon.  He’s bragged about being “more jewish” than Hillary, and now he’ll be competing with Trump to see who can sell out more of their children and grandchildren to the Jews, and any jewish Democrat should be sickened by his blatant pandering rather than be excited about it.  Unfortunately, though, for Biden, the powerful Likudniks are not going to let him undermine the “bro-mance” between Trump and Netanyahu, and his presidential bid is just for show, as he plays the sacrificial role of the Democrat’s version of Mitt Romney.