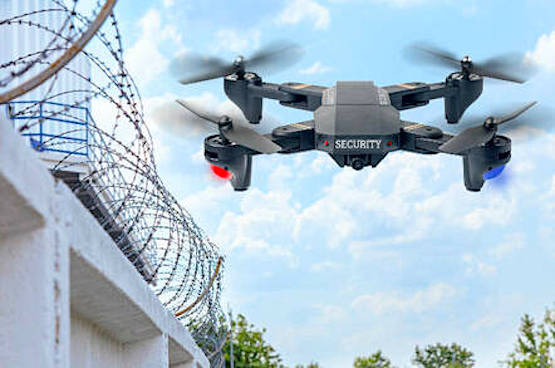 Authorities in the UK have begun using drones with loud speakers to direct the public to comply with public health measures announced on Monday to allegedly limit the spread of the novel coronavirus:

“The drones are equipped with speakers that will transmit messages directly to the public,” said the Neath Port Talbot Council via Twitter. “We are reminding residents to stay at home except for: shopping for necessities, obtaining medical supplies, one period of daily exercise, and traveling to and from essential work.”

The post includes video of a drone lifting off from the pavement outside a SpecSavers optical retail store. A polite but emphatic voice can be heard from the drone’s on-board speaker directing anyone within earshot to follow government rules and stay home.

The shadow of what appears to be the drone’s operator can be seen at the left edge of the frame as the video begins, which calls into question the need for a drone in the first place.

As Twitter user Frazer Shaw pointed out the obvious, “You know you could do the same thing with an officer and a megaphone and it would have much less of a creepy ‘Judge Dredd police vibe’, right?”

There’s no sign it will. Police in the UK have been testing drones at least since 2007 and they’re increasingly used for law enforcement-oriented surveillance around the globe.

Whatever ‘rights’ that citizens have in the U.K. come only at the discretion of the ‘authorities’ who can infringe upon your so-called ‘privacy’ whenever it suits them.

As the U.K.’s population rapidly becomes more racially diverse, the size of the Police State required to ‘keep the peace’ has increased exponentially.

Like all Bolshevik socialist experiments, a ‘snitch culture’ is encouraged where everyone potentially becomes the eyes and ears of the ‘authorities’ whose duty it is to punish all those who are a ‘threat’ to the artificial social ‘order’.

People must be trained to live in fear and accept constant surveillance for the ‘greater good’.

Expect a knock on your door at any minute to be questioned about a comment you left on Facebook.

You apparently object to this experiment in diversity.

It is our job to make sure you will see the error of your ways.