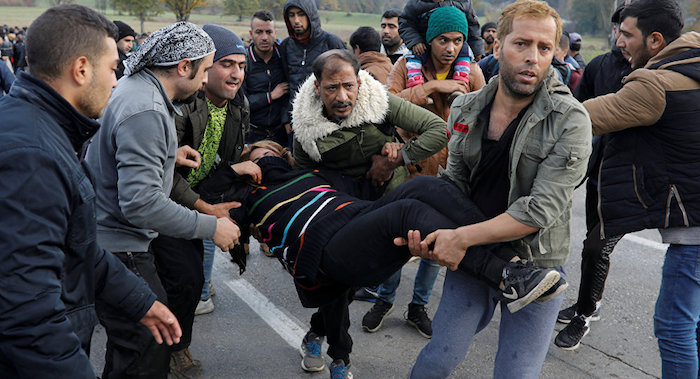 Thousands of Muslims attempting to cross the border from Bosnia into Croatia are being turned back by police using tear gas and batons:

Thousands of migrants are stuck in Bosnia and are now trying to enter the European Union as temperatures are dropping. It is believed that Croatia isn’t their main interest, with their final destination being the wealthier countries of Western and Northern Europe.

Croatian riot police have clashed with migrants seeking to enter the country from across the Bosnian border, Reuters reported on Wednesday.

Earlier in the day, hundreds of migrants broke a Bosnian police cordon and blocked the Maljevac border checkpoint in northwestern Bosnia in a bid to pressure Croatian authorities into allowing them clear path towards Western EU countries through Croatia.

They reportedly shouted “Open borders!” hurling stones at Croatian police, who responded with teargas and baton charges, leaving several people injured. A woman sustained head injuries during the clash and was rushed to hospital alongside another injured man.

According to Bosnian media, the migrants had spent two nights sleeping some 100 meters from the border crossing, hoping to be allowed into Croatia. They warmed themselves next to campfires and set up improvised tents to spend cold nights.

“Some 100 metres off the border between Bosnia and Croatia, a group of some 80 migrants arrived at about 12:00 pm. This number increased to about 350-400 as the day went on. There are people who fall into vulnerable categories there, women and children,” said Bosnian police spokesperson Sanela Dujkovic, as cited by N1 media outlet.

The migrants refused to leave, prompting Croatian police to set up a fence on their side of the border. Most of them want to travel through Croatia, heading to wealthier European Union countries.

After the official closure of the so-called Western Balkans migration route (Greece-Macedonia-Serbia-Croatia) in 2016, refugees now travel to the EU countries through a new Balkan route, increasing pressure on the reception capacities of Bosnia, Albania, and Montenegro with thousands of asylum seekers registered in these countries in early 2018.

This situation is what every European country will face in the next few years as the unwashed masses from the Middle East and Africa attempt to flood into Europe to take advantage of their socialist welfare programs.  Today the police are merely using tear gas and batons, but in the future they will be forced to use live ammunition, as the emboldened invaders ignore border fences and armed guards.  This is the exact scenario that the nation wreckers want — White countries to use lethal violence to repel these invaders.

Once a number of these migrants are killed by border guards, the jewish-controlled press will go into full attack mode, vilifying any country that dares protect their own borders, except Israel.  After all, no border is more important than the lives of poor asylum seekers looking to escape their war-torn countries of origin.  The media will flood us with images of preferably dead women and children who only wanted a “better life”.  The EU will pass new laws to make it illegal to kill anyone who illegally tries to enter any EU member state, which will only serve to increase the flood and the violence.  Problem.  Reaction.  Solution.