Czech Republic Offers Nigerians and Other Undesirables $4,000 Bribe To Leave And Never Return 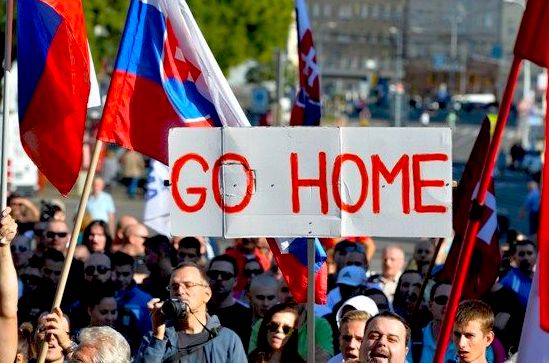 The Czech Republic has decided to pay Nigerians and other non-European migrants to encourage them to leave the central European country and never return:

The offer is under a programme that focuses particularly on migrants from Afghanistan, Iraq, Nigeria, Mongolia, and Vietnam.

According to a report published on RemixNews, a Czech Republic-based newspaper, the Czech government would pay any migrants who would voluntarily leave the country and other EU countries 4,000 EUR.

It is presumed that the outlay will be recovered 100 fold as the benefits tap will be turned off. The money saved can then be used to re-build the Czech Republic’s post migrant catastrophe triggered by the European Union.

The programme tagged ‘Returns’ established by the Czech Interior Ministry would assist immigrants with transportation costs and integration in their country of origin, including accommodation, household equipment or domestic animal expenses.

”Anyone who voluntarily leaves the country and promises not to return not only to the Czech Republic but to the EU will be eligible for the money,” the report said.

Such schemes are nothing new. During the later 1950s, Oswald Mosley, former leader of the British Union of Fascists made a similar offer to Britain’s growing immigrant population. The West Indian communities promised the wherewithal for a fresh start back in their own countries, leapt to the chance to better their prospects.

However, the scheme was torpedoed by MI5 and Special Branch. Collaborating with the fake right-wing leadership of the time, the Notting Hill Riots (1958) were organised. As a consequence, opinions were polarised and the West Indians stayed.

The Czech scheme is based on similar lines. ‘Allocation for the program amounts to 60 million CZK, 75 percent is to be covered from the European Asylum, migration and integration fund. Each individual could get funds ranging between 40,000 and 100,000 CZK. First funded returns should be processed in the third quarter of 2019.’

Of course, a Nigerian could live like a king in Nigeria with $4,000 in his pocket, but as the saying goes, a fool and his money are quickly separated, and it wouldn’t be long before that same Nigerian would be back in Europe, despite his “promise” not to return.  The Czechs are relying on the reputation that Blacks have of greedily taking a short-term gain while ignoring long-term consequences.

But it’s doubtful that many of these unwanted migrants will take this paltry offer.  Perhaps if they offered $10K, they’d get a significant number of takers; after all, if the U.S.A. offered a Black welfare queen $100K to leave for Africa, the country would see a profit within one or two years.  If the Czechs seriously want to rid the country of these undesirables, they are going to have to make them an offer they can’t refuse.