Danish MP: Not A Question of ‘If’ But of ‘When’ Sweden Becomes An Arab Nation 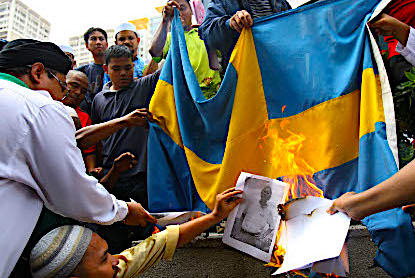 A Danish right-wing Parliament politician, Marie Krarup from the Danish People’s Party (DPP), revealed her pessimistic views on Sweden’s bleak future in an interview with the Swedish news magazine Fokus:

“When Sweden fails and stops being Swedish, it will affect the rest of us too”, she says.

She describes the Swedish immigration policy as “lax and weak”. Sweden “does not understand how dangerous mass migration is,” according to her, and she sees the neighboring country as a deterring example.

“When Sweden fails and stops being Swedish, it affects us as well, and we can’t keep the passport union between our countries”, she tells Fokus.

“We have a lot in common with the Swedes, and we are close, but when they de facto become an Arab Middle Eastern county, we will no longer have that much in common.”

Fokus also writes that Krarup and DPP don’t want migrants to learn Danish or work, instead they should be sent home as soon as possible.

“If you are granted asylum you will receive a temporary residence permit, then you reside in Denmark until you are sent home. And you should be prepared to be sent home at any time”, she says.

She concludes by telling the magazine how shocked her colleagues were when they visited Malmö and saw the ghettos and the criminality there with their own eyes.

The Swedes cannot have it both ways: they cannot remain Swedish and multicultural at the same time.  The “New Swedes” will simply out-breed the Old Swedes and genetically replace and absorb them.  If you need an historical example of this kind of disaster, just look at Turkey today; 2,000 years ago, when it was known as Anatolia, it was the heart of the White Byzantine Empire, one of the glories of the ancient world.  By 1,400 AD it was largely run over and controlled by Arabs, and its glory steadily faded.

The same is true of Northern Africa, which, in ancient times, was the home of a number of glorious civilizations, such as Carthage and Alexandria, including many Greek, Persian, and Roman colonies.  The arabs of North Africa today merely live on top of the ruins of those White civilizations.  The same fate awaits Sweden if they no longer have the desire to identify themselves as a Christian nation or people.  As home to a now largely self-identified atheist White population, all they have in common as a people is their desire to virtue signal to the rest of Europe just how “inclusive” and “non-racist’ they are.  Clearly, they have chosen to go “the way of Balaam,” (Jude 1:11 and 2 Peter 2:15 and Revelation 2:14).