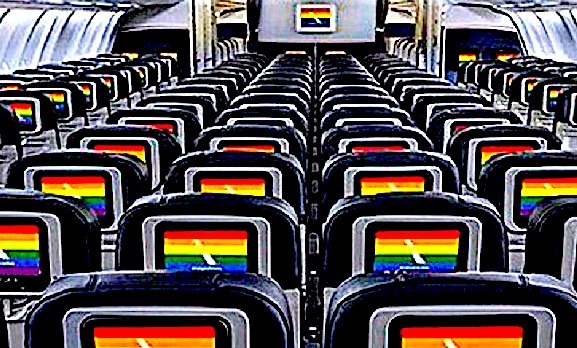 With great ‘pride’, Delta Air Lines has announced that it has caved to demands from anti-traditional family hate groups that it stop censoring explicit homosexual sex scenes from in-flight movies:

In a statement, Delta claimed that it had not requested that “homosexual content” be removed from movies shown on its flights.

“We value our in-flight entertainment options as a means to reflect the diversity of the world,” a company statement said. “We are reviewing the processes of our third-party editing vendors to ensure that they are aligned with our values of diversity and inclusion.”

According to Fox News, a spokesman said Delta is “immediately putting a new process in place for managing content available through Delta’s entertainment.”

“Studios often provide videos in two forms: a theatrical, original version and an edited version. We selected the edited version and now realize content well within our guidelines was unnecessarily excluded from both films,” the statement continued. “We are working to make sure this doesn’t happen again.”

“What message is this sending to viewers and especially to women?” Wilde tweeted. “That their bodies are obscene? That their sexuality is shameful?”

Wilde noted that airlines contract with third party companies to tailor movies according to what is deemed appropriate.

…Delta Airlines was also criticized for filtering out male homosexual acts when it showed Rocketman, which depicts the life of popular homosexual entertainer Elton John and his homosexual liaisons, alcoholism, bulimia, mental illness, and drug use.

On Twitter, digital content editor (((Shana Krochmal))) of Entertainment Weekly criticized Delta for deleting scenes of male-on-male perversion. While flying on Delta, she found that the inflight version of Rocketman had been “stripped of almost every gay reference or scene that Elton John fought to keep in the film’s mainstream release, including a simple chaste kiss.”

Delta Airlines had previously received the highest rating of LGBTQ compliance from the pro-homosexual Human Rights Campaign and its Corporate Equality Index (CEI).

As recently as the 1960s, Christian pro-family groups were still so powerful that the Jews of Hollywood had to have their movies and television shows conform to the Hays Code, which strictly monitored all obscene content.

But under relentless pressure from civil liberties groups, at the height of the American Bolshevik Revolution in the 1960s, the Hays Code was abandoned for the far more lax “ratings system” which opened the floodgates to what we have today.

In fact, in 2003 Hollywood heavily promoted a self-congratulating documentary, Easy Riders, Raging Bulls, which glorified the filmmakers who helped break the Hays Code as “champions of freedom” and defenders of “artistic expression.”

And the predictable end result is that today films must now essentially comply with Satan’s Code of “Do what thou wilt,” and any film that does not conform to the perverse “values” of this radical agenda will be shut down.

Today, there is nothing more immoral, offensive, and un-American than censoring gay sex scenes.