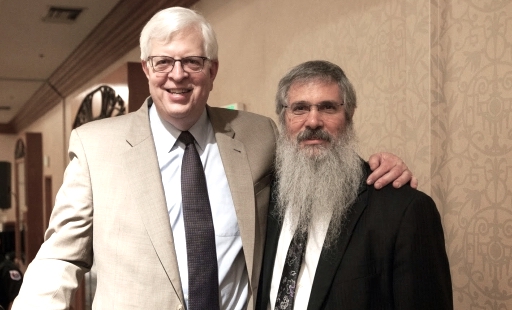 Buried within another tedious article promoting jewish “conservative,” Dennis Prager, whom the radical Chabad Lubivitch have deemed “kosher,” we find him claiming that all “conservative” Whites would rather their daughter marry a conservative Black than a White liberal:

Ask any white conservative, including one who supports Trump, the following three questions:

1) Do you have more in common with, and are you personally more comfortable in the company of, a white leftist or a black conservative?

2) Would you rather have nine white leftists or nine black conservatives on the U.S. Supreme Court?

3) Would you rather your child marry a black Christian conservative or a white non-Christian liberal?

A white racist would prefer the whites in each case.

The only thing that Prager’s self-serving, unscientific poll actually proves is that the so-called “conservative” White supporters of Trump that listen to Prager are all brainwashed by jewish racial egalitarian Kool-Aid, and just like “enemy” liberals, they are willing to sacrifice their White daughters on the altar of “diversity” just to prove that they are not, in fact, gasp, “racist”.

Prager is already on record claiming that biblical Adam had no racial identity, even though Adam’s name literally means “to show blood in the face,” that is, to blush.

Everything conservatives want to maintain is a White value, and without White people, those values have no meaning nor will they be preserved.

Your daughter’s mulatto children are not going to preserve the values of our Founding Fathers.

Your “conservative” mulatto children will preserve, at best, the values of Jews like Dennis Prager, who have contempt for any White man who thinks his bloodline is quite literally a gift from God.