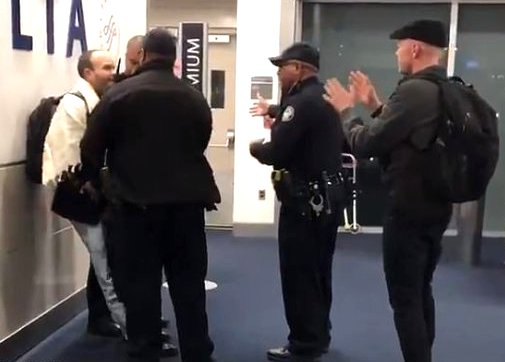 David Shlomo Toaff, 37, was arrested after demanding that all Jews on a flight from Washington, D.C. to Atlanta identify themselves to him by a show of hands:

A bizarre incident on a flight from Washington DC to Atlanta on Wednesday night resulted in the arrest of a Jewish man after passengers claimed he launched into an ‘anti-Semitic’ rant.

The video shows the man, who has been identified as David Toaff, trying to avoid police while they attempt to take him into custody.

Toaff, 37, who is seen wearing a backpack and tallit, starts to question the officers at one point, asking: ‘What did I do wrong?’

That is when someone off-camera yells: ‘You’re a Nazi.’

The entire incident was captured on camera by one of the passengers on the flight, Jordan Dale.

‘Today a man on my plane went on an anti-Semitic tirade and demanded “all Jews raise their hands” so he could “identify [sic] them.” Later, during the arrest he protested and resisted arrest,’ wrote Dale on Twitter.

‘Incredible work by Atlanta police, I highly recommend watching the whole video.’
Toaff was eventually booked into the Clayton County Jail, but has not been charged with making any sort of hate speech.

He has instead been charged with disorderly conduct and obstructing or hindering law enforcement.
Toaff’s inmate details reveal that he lives in Washington DC and that his middle name is Shlomo.

The video seems to show that the charges Toaff is facing are the result of his behavior after the flight landed, and not any remarks he made while the flight was in the air.

Atlanta Airport Police can be seen doing their best to try and reason with Toaff, but he refuses to cooperate.

‘You’re making it worse for yourself,’ one of the officers says at one point in the video.
A defiant Toaff responds: ‘I’m not doing anything wrong.’

He was booked at 10:30pm and is being held on a $1500 bond and $350 fee for the disorderly conduct charge, while there is no cost attached to the second count.

Even jewish sources admit that Jews suffer from a much higher incidence of mental illness than the general public, but in order to make Jews appear “normal” to the rest of us, they have changed the definitions of “normal” and “mental health.”  While this strategy may help keeping thousands of Jews out of mental hospitals, it actual puts many of them at risk for forced incarceration and senseless run-ins with law enforcement, such as the case with Toaff.  Clearly, many Jews are in dire need of mental health therapy, but they aren’t getting it because their jewish friends and family are in no position to judge what is normal.

From a jewish perspective, Toaff really wasn’t “doing anything wrong,” because when Jews like Toaff find themselves in unfamiliar situations, they all want to know who the other Jews are in the room so that they feel more comfortable.  Jews can become very nervous and paranoid if they believe they are the only Jew in a crowd of people or even on a commercial flight.  And that is why they flood our White countries with Jews and other non-Whites — they don’t want to feel like they are the only Jew in a land of normal White Christians.