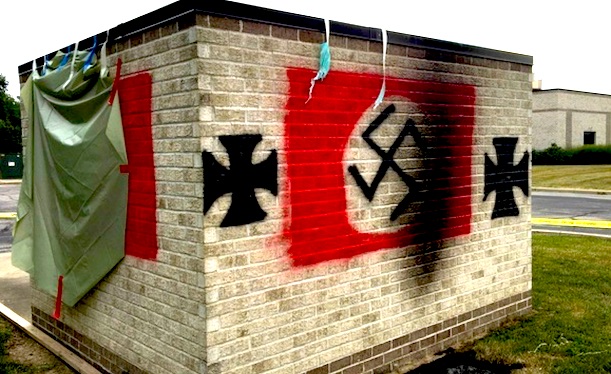 Richard Tobin, an 18 year-old New Jersey man, was arrested and held without bond for allegedly ordering the vandalism of two synagogues in other states:

Richard Tobin is accused of using a neo-Nazi social network called The Base to find volunteers to for the September graffiti attacks on synagogues in Michigan and Wisconsin, the Philadelphia Inquirer reported.

Tobin also allegedly said he planned the attacks as part of nationwide campaign he called “Operation Kristallnacht,” a reference to the 1938 pogrom against Jewish homes, synagogues and Jewish owned-owned businesses in Germany and Austria.

Tobin also confessed to driving to a New Jersey mall with a machete that he planned to use to kill black shoppers.

A complaint filed Tuesday by the FBI charges Tobin with conspiring with a hate group against the rights of minorities, including Jews, NJ.com reported.

The group calls itself a “white protection league” and advocates for a country populated only by white people. Its members practice “doomsday prepping,” or preparing for the end of the world, and participate in military training. The group’s symbol references a failed 1923 German coup led by Adolf Hitler, according to the FBI.

The court filings have not named the people who attacked the two synagogues.

It’s worth noting that the social network Tobin belonged to –“The Base”– just so happens to be the English translation of Al Qaeda, the fake terror organization jointly created by the CIA and the Israeli Mossad.

It’s safe to assume that “The Base” is another Mossad honeypot psy-op to attract unhinged loners, like Tobin, and coax them into some pointless and counter-productive violent acts.

How exactly is vandalizing synagogues or attacking Blacks with machetes going to magically make all non-Whites disappear from America?  How is giving Jews the political ammunition to crack down further on anyone advocating for White interests going to further your cause?

If you really want to undermine jewish power in this country, attacking them and their property is just going to accomplish the exact opposite of your intention, which is why Jews promote violence online in White Nationalist circles and forums.

You really want to see the Jews panic as their political and social power crumbles?  Turn off your television, pick up your Bible, and turn your life over to Christ.  It doesn’t even require joining a church group.

Not if, but when enough White people commit to that, Babylon the Great will fall, as Christ’s Revelation promised us it would.  That’s the best way to “hurt” Jews without ever breaking the law.