Despite Dr. Mengele ‘Experimenting’ On Her Mother, Israeli Woman Decides To Get Untested COVID Vaccine Anyway 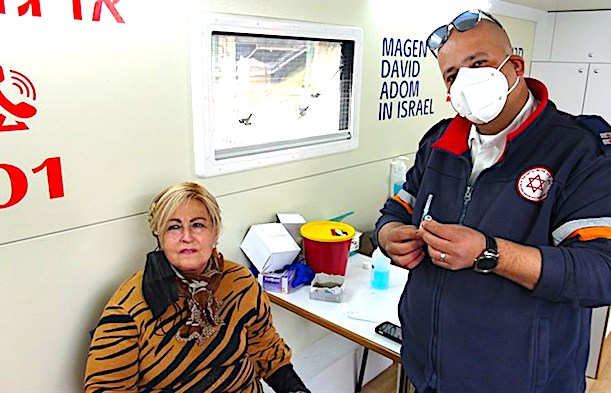 Bella Freund, the woman who became famous in 1992 when she rescued a terrorist who had stabbed two Israeli youths from an Israeli mob so that he could be turned over to the police alive, arrived to receive her coronavirus vaccine Monday:

Freund is the daughter of Holocaust survivors, and her mother was one of the victims of the experiments of the infamous Nazi doctor Josef Mengele. This family history has made Freund apprehensive about invasive medical procedures and the coronavirus vaccine in particular.

Despite her apprehension, today (Monday) Freund arrived at the Mahane Yehuda market in Jerusalem, where a Magen David Adom (MDA) mobile station was set up to carry out vaccinations with people who are interested in receiving the vaccine.

Freund told Arutz Sheva about her concerns as well as what led her to decide to receive the first vaccine of her life.

After a conversation with Paddy Dekidak, the MDA paramedic in charge of the vaccination market at the Mahane Yehuda market in Jerusalem, Freund became convinced of the need to overcome her fears and get vaccinated.

Freund called Magen David Adom a “wonderful organization” which “deserves a Nobel Prize” for the lives it saves. She stressed that her fears stemmed entirely from her family’s history and not from any of the fake news which has spread across the internet regarding the coronavirus vaccine and that she has always taken the coronavirus seriously.

“I said to myself, maybe now is the time,” she said of her decision to be vaccinated.

Basically, this transparent propaganda is a tacit admission that Jews should rightly be skeptical of participating in the largest medical experiment in the history of the world.

But not to worry, most likely all the so-called “Holocaust survivors” and many Israelis are probably receiving placebo shots after all — no way would Israel risk the lives of these cash cows on a dangerous and untested vaccine.

Today’s international laws against medical experimentation on people arose out of the Nuremberg trials — specifically the so-called “Doctors Trials” where German doctors who allegedly “experimented” on prisoners in the concentration camps were “held accountable”.

Oddly enough — Josef Mengele was not one of those doctors, nor was his name even mentioned in the trial transcripts.

How can that be?

Josef Mengele — the so-called “Angel of Death” — the most evil, notorious “Nazi” aside from Adolf Hitler himself — was not even wanted by the Allies after the war, nor was he arrested — after all, he wasn’t even the head doctor at Auschwitz.

If was only after the first “Doctor’s Trial” that rumors about Mengele began to circulate and gain traction — and when Mengele heard these rumors, he was tempted to turn himself in and defend himself against his false accusers — but friends talked him out of it — he’d never receive a fair trial they rightly asserted — no German defendants at Nuremberg were allowed to properly defend themselves — and so he fled to South America instead.

As the legend of Mengele grew, Jews like Bella Freund’s mother jumped on the attention-seeking bandwagon and began making all kinds of wild, irresponsible, and implausible accusations against Josef Mengele in absentia.

And as Jewish scholar, Norman Finkelstein, observed — when Jewish “survivors” are allowed to make these wild accusations without being cross-examined or questioned, it only encourages them to embellish their tales and lie even more.

In 1977, when Mengele’s son, Rolf, met him while he was in hiding in Brazil, Mengele asserted that he had “never hurt anyone in his entire life” — one would think that if he had performed these experiments he would instead have offered a “rational” explanation for why he did what he did.

And support of Mengele’s innocence surfaced when in 2011 a wealthy Jew bought Mengele’s personal diary at auction and has since then kept it hidden from public view — proof there was nothing incriminating in it — if there had been, no doubt it would have been published in every known language on the face of the earth.