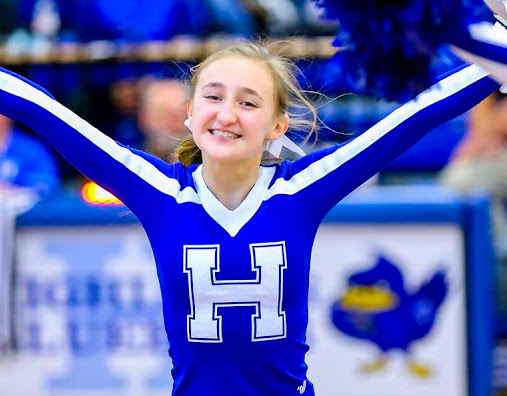 Lilliana Schalk, a healthy 13 year-old cheerleader from Kentucky, died suddenly last week from no apparent cause, but her symptoms were similar to other girls who have died suddenly after receiving the controversial HPV vaccine:

A Kentucky father is heartbroken and in “disbelief” after his 13-year-old daughter mysteriously died hours after getting sick at her cheer competition.

Eighth-grader Lilliana Schalck was warming up at the All-Star competition on Feb. 23 when her hands went numb and feet started tingling, said her father, Dan Schalck.

Very quickly in the ER things just kind of degraded.

“I kind of took her aside, was maybe going to get her some fluids,” Schalck told ABC News Wednesday. “She was just getting kind of weaker, just not acting herself. She just wanted to sit on the floor.”

The team couldn’t perform without her so they took themselves out of the lineup, he said.

“The medical staff at the venue came over, asked some questions, tried to get an assessment,” he said, and they decided to bring Lilliana to the emergency room at a children’s hospital in Columbus.

“Very quickly in the ER things just kind of degraded,” Schalck. “The nurse liaison pulled me aside and asked me who would be important in her life that I might like to call.”

I was in disbelief. I couldn’t understand what had happened so quickly.

“In the ICU they were working on her. At some point I was able to get close, hold her hand. At that point they just couldn’t do anymore,” he said.

Lilliana’s team was supposed to compete at 6 p.m. and he said the team took themselves out of the competition around 5:45 p.m.

Schalck still does not know how his daughter died.

“One nurse came out and said, ‘We have no idea. We’re grasping,'” he said. “I was in disbelief. I couldn’t understand what had happened so quickly.”

Nationwide Children’s Hospital declined to release any information on the death, deferring comment to the coroner’s office.

Dr. Anahi Ortiz of the Franklin County Coroner’s Office said there are no preliminary findings from Lilliana’s autopsy.

“We have pending for cause and manner at this time,” Ortiz told ABC News in an email Thursday.

The full coroner’s report is expected to take eight to 10 weeks.

She was really good at it — which made her work hard to be even better.

Lilliana is also survived by her mother and sister. Schalck described his daughter as kind, sincere, hardworking, loving and outgoing.

Lilliana’s symptoms of neurological tingling and numbness are consistent with known side effects of the HPV vaccine, which is commonly administered to young girls at her age.

There have been over 150 young women in America who have died from adverse reactions to the HPV vaccine, and yet the CDC still promotes it heavily as “safe and effective”.  There is no proof whatsoever that the HPV virus causes cancer — the viral theory of any cancer was discarded decades ago as unsubstantiated.

And since coroners are not specifically trained to identify vaccine-related symptoms and damage, it’s unlikely that the HPV vaccine will be blamed for Lilliana’s death, even if it turns out that she had received one previous to her untimely death.

Her parents should never merely accept that their young daughter dropped dead for “no apparent reason.”  They should demand that the coroner look for evidence of vaccine injury.  They need to file a case with the National Vaccine Injury Compensation Program, which has paid out billions to families negatively affected by vaccines.