Did Copper For The Old World’s ‘Bronze Age’ Come From Mines In The New World? 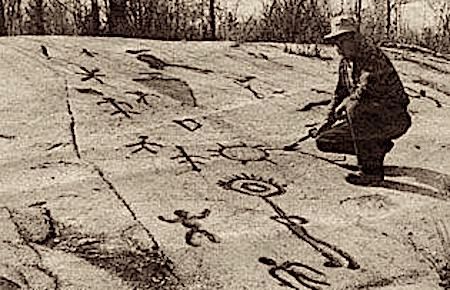 Artifacts from the Bronze Age continue to be discovered by archeologists all over Europe and the Near East, but what is rarely discussed is where the massive amount of copper required to make all those artifacts came from —  considering the known small-scale copper mines in England, continental Europe, and the Near East simply cannot account for it all.

Dr. Barry Fell, in his book Bronze Age America, provided credible evidence that a major source of the required copper can be found in North America, but because it doesn’t conform to the dogmatic paradigm of Christopher Columbus as being the first European on North American soil, mainstream archeologists still refuse to recognize such a possibility.

Barry Fell (born Howard Barraclough Fell) (June 6, 1917 – April 21, 1994) was a professor of invertebrate zoology at the Harvard Museum of Comparative Zoology, but he is best known for his work in New World epigraphy, arguing that various inscriptions in the Americas are best explained by extensive pre-Columbian contact with Old World civilizations.

Fell was born in England — but raised in New Zealand — and received his PhD at the University of Edinburgh, Scotland. He emigrated to the U.S. and continued his research at Harvard University.

In the video lecture below, Dr. Fell explains how some of  the copper necessary to make the tools of the Bronze Age in Europe could indeed have come from mines in North America:

In this meeting, I’d like to talk about my book, “Bronze Age America.” It deals with the voyage made by a Scandinavian king, we think, about….1,700 years before Christ, from Scandinavia to the Saint Lawrence river way, to a point somewhere near where Toronto now stands. And there he established a trading settlement at now what is called Peterborough in Ontario. He brought cloth, apparently, from Europe to trade with the Algonquin Indians, and from them he obtained copper ingots….

They originated in the copper peninsula on the shores of Lake Superior. And we know they were mined by the Algonquins four to five thousand years ago. There are about five thousand vacant copper mines now left on the Copper Peninsula, and millions of pounds were removed from them by the Indians. And nobody could figure out where they’d gone.

The professors at the Michigan School of Mines produced this book about these ancient copper mines and speculated that perhaps Egyptians had come and taken the copper away. The archeologists had nothing to say about the matter. Not very much copper is found in the remains of the Indians of that period. The mounds don’t contain very much copper.

What happened to the millions of pounds of copper that were taken out at that time, carbon-dated, as I said, to two to three thousand B.C. We think that finds at the site in Peterborough give the explanation. They were obtained by visitors from abroad, from Scandinavia, and the copper was taken to Europe, and from there converted to the Bronze Age tools of that period.

Of course, this raises the question that if the Indians showed no use for copper themselves, why would they know to mine it in the first place?

As Steven Collins has pointed out, there is plenty of evidence to suggest that the ancient Israelite Phoenicians were the first to develop the massive copper mines on the shores of Lake Superior in about 2,000 B.C., and they may have used the local Indians as labor for the mines.  These could indeed be part of legendary “King Solomon’s Mines”.

The Indians who later traded copper ingots with the Scandinavians, as Dr. Fell describes, would have known about the source from their own history of contact with the ancient Phoenicians.