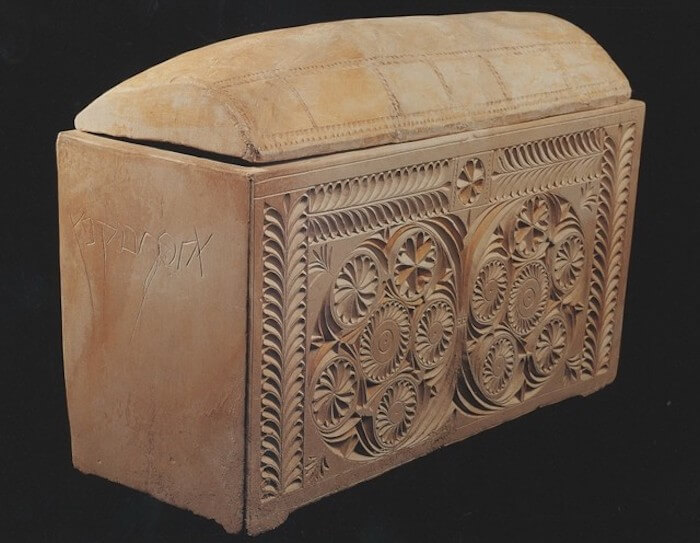 Many Christians and self-proclaimed scholars are oblivious to archeological findings that corroborate the events in both the Old and New Testaments. This is, of course, no surprise as the jewish media and academia work hard to push the notion that Christianity is at odds with “science” and archeology.

The real truth, however, is that there are many archeological findings that support and uphold the Christian Scriptures. Here is yet another major discovery, which most Christians are not even aware of:

In 1990 two burial caves were discovered on a hill immediately south of Jerusalem. They contained twelve loculi (Hebrew kokhim) and four ossuaries. Two of the ossuaries were inscribed with forms of the name Qayapa’, or Caiaphas, a family name familiar from the New Testament and from the first-century historian Josephus.

One member of the Caiaphas family served as high priest from 18 CE to 36/37 CE; he was in office during the public career of Jesus and presided at his trial. Though the New Testament refers to him only by his family name, his personal name, Joseph, is mentioned by Josephus (Jewish Antiquities 18.35). He had a long-standing association with the part of Jerusalem in which the tomb was discovered.

According to Matthew 26-3-5, the leading priests and elders gathered in “the palace of the high priest, who was called Caiaphas,” when they conspired to have Jesus put to death. Tradition located this house of Caiaphas on the rise of Abu Tor, and in Crusader times it was given the name “The Hill of Evil Counsel.”

One ossuary, bearing the name qp’ = “Qapa’,” or Caiaphas, contained the remains of five individuals. The other Caiaphas ossuary is highly decorated with an intricate pattern of rosettes enclosed in circles.

On the undecorated long side is the family name, qyp’ = “Qayapa’,” with a slightly different spelling, but the narrow, decorated side shows the name of an individual- yhwsp br qp’ = “Yoseph bar Qapa’,” or Joseph of the Caiaphas family. Although this ossuary contained the remains of six people, one skeletal set is of a 60-year-old man. It seems quite possible that this man was Joseph Caiaphas, the high priest in the time of Jesus.

The identification is not certain, but the name and historical period fit perfectly, and the beautiful, ornate limestone ossuary seems well suited to such a high-ranking individual.”

It had long been contended that no such historical figure as Caiaphas ever existed, so this discovery of his grave completely silenced scoffers. Not only does it corroborate the testimony of Matthew, Luke, and John – it once again shows that the Gospels are in complete agreement with so-called secular history.

Despite the biblical significance of this archeological find, to this day – almost 30 years after its discovery – very few Christians are aware of this remarkable corroboration of the New Testament.

How Jews Undermined the Authenticity of the Ossuary of James, Brother of Christ