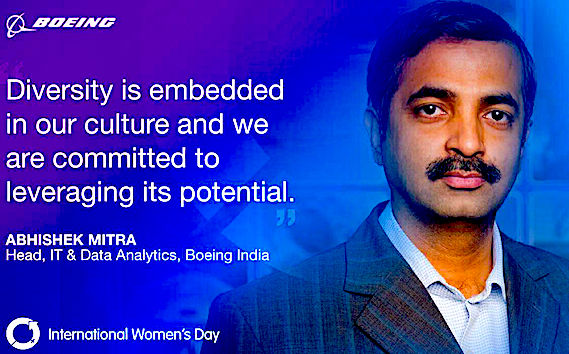 Despite the fatal results and billions of dollars lost in the 737 Max debacle, Boeing remains firmly committed to diversity and outsourcing its design and software programming to India, a disastrous policy that was openly mocked in recently released internal employee memos:

The latest documents Boeing has released related to the design and certification of the 737 Max paint a dark picture of employee reactions to problems that came up during the development of the now-grounded airliners.

The documents include emails and internal communications. In one message, employees mock the Federal Aviation Administration and brag about getting regulators to approve the jets without requiring much additional pilot training.

In another document, an employee ridicules colleagues involved in the development of the troubled plane, saying “this airplane is designed by clowns who in turn are supervised by monkeys.”

“I still haven’t been forgiven by God for the covering up I did last year,” one employee says in 2018, referring to an exchange of information with the FAA.

Another damning exchange calls into question the safety of the 737 Max long before the plane was approved to fly passengers.

“Would you put your family on a Max simulator trained aircraft? I wouldn’t,” says one employee to another, who responds, “No.”

House Transportation Committee Chairman Peter DeFazio, a Democrat from Oregon, called newly released documents “incredibly damning,” adding, “they paint a deeply disturbing picture of the lengths Boeing was apparently willing to go to in order to evade scrutiny from regulators, flight crews, and the flying public, even as its own employees were sounding alarms internally.”

A Boeing official said the communications were written by a small number of employees, primarily Boeing technical pilots and personnel involved with the development and qualification of Boeing’s 737 Max simulators. Some of them are the same employees involved in sending other damaging emails and internal messages that were disclosed last year.

The company official said the language used and sentiments expressed in these communications “are inconsistent with Boeing values, and the company is taking appropriate action in response.”

The FAA reviewed the documents for safety implications. “Our experts determined that nothing in the submission pointed to any safety risks that were not already identified as part of the ongoing review of proposed modifications to the aircraft,” the FAA said in a statement.

The statement goes on to call the tone and some of the language contained in the documents “disappointing, [but] the FAA remains focused on following a thorough process for returning the Boeing 737 MAX to passenger service.”

So Boeing is more concerned about the racist ‘tone’ or implications of the memos, not the safety issues or the resulting deaths that their commitment to diversity has cost them.

Their Black affirmative action Diversity Officer, who was born on the mean streets of Chicago’s South Side, will find out who made these comments critical of diversity and make sure they do not go unpunished.

Diversity and technology do not mix — they are like oil and water.  If a racial group is incapable of developing a technology on their own, they have no business being hired, regardless of so-called ‘training’ or ‘education’ or impressive diplomas, to work on these sophisticated projects in White countries where ALL these technologies were developed.

If these Black and Brown ‘engineers’ want to work on their own airplanes in their own countries, let them.  If Black pilots want to fly those Black-built planes, so be it.

Diversity lowers wages for highly qualified White engineers here in America where they are needed.  That’s all they do.  And the results are catastrophic.