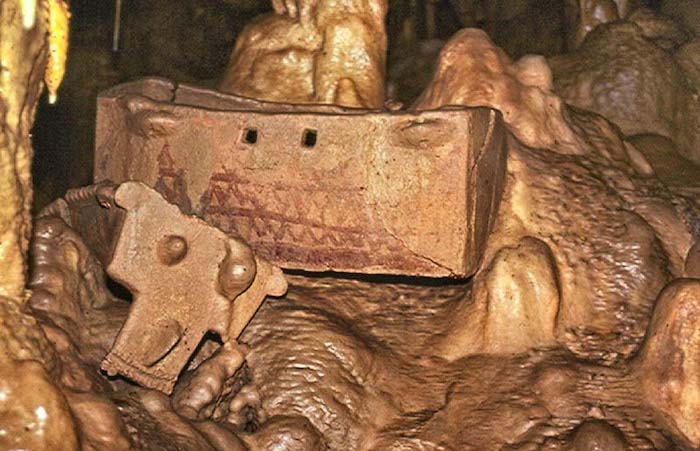 Jewish archeologists were left scrambling for answers when their DNA analysis of bones found in an ancient grave dating to as much as 6,000 years ago showed that some of the earliest inhabitants of the land of Israel were aryan-looking with fair skin and blue eyes:

Blue-eyed, fair-skinned settlers inhabited the Levant some 6,500 years ago, according to an international interdisciplinary team of scientists. An article released Monday in the peer-reviewed journal Nature Communications solves the mystery of how Chalcolithic culture got to the Galilee: via population migration.

When they mapped the genomes of bones from 22 of the 600 individual skeletons discovered in a massive necropolis near Peki’in in the north of the country, the scientists found a genetic mix quite unlike that of previous and successive settlers of the region.

“The genetic analysis provided an answer to the central question we set out to address,” said Harvard’s Reich. “It showed that the Peki’in people had substantial ancestry from northerners – similar to those living in Iran and Turkey – that was not present in earlier Levantine farmers.”

The Chalcolithic era, also dubbed the Copper Age, follows the Stone Age and precedes the Bronze Age. There are already several DNA analyses for Bronze Age settlement in the Levant, including last summer’s publication of research from Bronze Age burials that shows that 93 percent of the ancestry of modern Lebanese ancestry comes from the Canaanites. Now, the new Peki’in genome mapping fills in a void of 3,000 years of DNA analysis.

With the new study’s conclusion that some half of the indigenous Chalcolithic people’s genome derived from ancient Turkey and Iran, it appears that these artifacts may have arrived during migration, and were not merely as the byproducts of a trade route as previously suggested.

…The archaeologists saw indications that bodies were taken to the cave from all directions for internment — as far as the Jordan Valley, the Judean and Negev deserts, and the coast of Lebanon. “Clearly, great efforts were made to transport the bones of the dead to this revered site,” they write.

“Its cultic objects and grave goods exhibit artistic styles of various Levantine subcultures,” which, state the archaeologists, suggest the cave served as “a regional mortuary center, where people from all over ancient Palestine converged to bury their dead.” According to the new study, radiocarbon dating finds the cave was in use throughout the Late Chalcolithic (4500–3900 BCE).

The data extracted from the skeletal remains, taken from 22 individuals, “is of exceptional quality given the typically poor preservation of DNA in the warm Near East,” wrote the scientists.

“This study of 22 individuals is one of the largest ancient DNA studies carried out from a single archaeological site, and by far the largest ever reported in the Near East,” said Tel Aviv University researcher May.

The scientists uncovered some recessive genetic traits not usually expected in human remains from the Levant.

“Certain characteristics, such as genetic mutations contributing to blue eye color, were not seen in the DNA test results of earlier Levantine human remains,” said May.

The blue-eyed, fair-skinned community didn’t continue, but at least now researchers have an idea why. “These findings suggest that the rise and fall of the Chalcolithic culture are probably due to demographic changes in the region,” said May.

Of course, the Jews who conducted this study write off the fair skin and blue eyes as a “anomalous recessive genetic mutation,” but that’s because they have to continue to deny the fact that the original Israelites were White as was most of the Middle East— and certainly not the ancestors of today’s arab-looking Jews who now occupy the land of the ancient Israelites.

The Times of Israel article also fails to mention that both ancient Turkey (Anatolia), Iran (Persia), and Egypt were also occupied by White people at this time in ancient history, and therefore, it makes perfect sense that they would be related to these people found in this Chalcolithic cave in Northern Israel.

And notice at the conclusion of the article, the jewish writer is sure to point out that these fair-skinned, blue-eyed people “didn’t continue” to live in Israel. What does he base this on? The answer is nothing — except his fear of the truth that the world must never know — that today’s Jews who occupy that land are clearly not who they say they are. DNA tells us exactly who the ancient Israelites were.