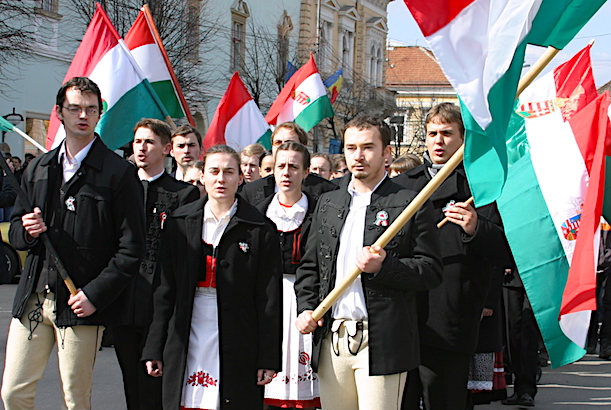 A MyHeritage DNA study has revealed that Hungary’s population has the highest percentage of Jewish ancestry outside of Israel with at least 7.6% of the 4,981 people living in Hungary who took the DNA test were found to have at least 25% or more Ashkenazi Jewish ethnicity:

“This is equivalent to having at least one grandparent who is fully Ashkenazi Jewish,” MyHeritage said. “This is a significantly higher percentage than the 3.5% observed in DNA test-takers living in the USA and 3% in Canada.”

Based on UN estimates, Hungary’s population is 9.7 million.

“MyHeritage discovered that 4.2% of DNA test-takers in Hungary have 50% or more Ashkenazi Jewish ethnicity,” it added.

The online genealogy platform worked on this research together with Dr. Daniel Staetsky, director of the European Jewish Demography Unit at the London-based Institute for Jewish Policy Research.

…Staetsky explained that, “commercial genetic testing is an activity where the most educated and well-to-do classes of a society will be over-represented.

Bearing this in mind, he said that, “the number of people with 50% or more Ashkenazi Jewish ethnicity in Hungary amounts to 130,000.”

…The family research platform stressed that “beyond Hungary, a challenging factor for demographers examining the total global Jewish population has been Jews’ concealment of their identity before and during the Holocaust.

“Even after the Second World War, it has long been suspected that many were either discouraged from revealing their Jewish identity and have kept it hidden, or have been completely unaware of their Jewish ancestry,” it said.

MyHeritage made it clear that this study is solely based on the number of Hungarians who have Jewish ancestors as determined by genetic testing, and without regard to the determining principles of Jewish religious law, which is based on the maternal line.

…Gyula Nemeth, a 41-year-old illustrator from Budapest, said he knew that his grandfather was Jewish and assumed that he’d see some of that in his results.

“But I was surprised to actually get 25% Ashkenazi Jewish ethnicity – exactly as I knew I have.” Nemeth knew that his maternal grandfather was Jewish, but he “never lived a Jewish life,” and neither did his great-grandparents….

“Antisemitism is becoming very common these days,” he said, adding that “I hope that research like this might change the attitude of people who are prejudiced.”

…For many years, demographers believed that the countries outside of Israel with the highest proportion of Jewish inhabitants are, in order, the USA, Canada, France, Hungary and Uruguay.

However, this study has challenged these assumptions, discovering that after Israel, the top countries in terms of significant Ashkenazi Jewish ethnicity were Hungary and Russia, followed by Argentina, South Africa, Ukraine and then the U.S. This is based on countries with a sufficiently large DNA sample sizes.

This article admits its transparent bias: people from the “educated” class in Hungary are more likely to take these genetic tests, and since Jews are more likely to be counted in that social class, that sample is more likely to be over-represented with people who identify as Jews or who are unwitting Jews by their genetic proclivities to gravitate toward the “white collar” world.  In other words, this study will mislead Hungarians into thinking that a much higher percentage of them are of part jewish ancestry than they actually are.

But this study is being released at a time when Hungary just so happens to be experiencing an ethno-nationalist and Christian resurgence, which surely is not a mere coincidence.  If Hungarians can be convinced that millions of them are partly ethnic Jews, perhaps they will be more sympathetic to jewish influence in the country, and less likely to “scapegoat” the Jews, like George Soros, who are trying to undermine its identity as a Christian nation.  And perhaps if everyone’s DNA tests comes back with the predictable “0.1%” Ashkenazi jewish admixture, then maybe antisemitism will magically disappear everywhere.