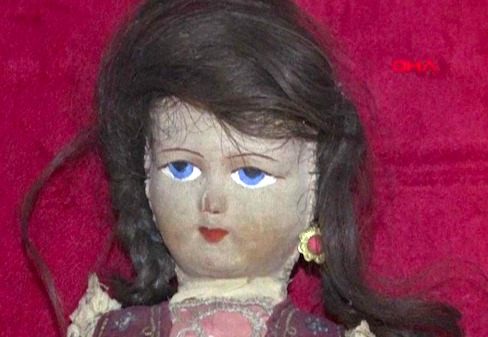 A toy museum in Turkey has put on display what it says is allegedly a doll with hair from a Jewish girl killed in the so-called  Holocaust:

The object has been on display at the Anatolian Toy Museum since its opening in 2017, the Turkish edition of CNN and other Turkish media reported last week.

“Before being killed, girls’ hair was cut and used on the dolls produced for rich German children. This is the tragedy of baby dolls with real hair,” museum director Emrah Ünlüsoy told CNN.

He was quoted as telling Hurriyet Daily News that the doll was bought in Germany and that the victim whose hair was used to make it was killed at Auschwitz in 1941.

Mass murder of Jews began at that complex of camps in Poland in 1941.

The Nazis sheared and stored hair from underage victims together with adults women’s hair. It was not used in any significant scale for the production of toys.

The articles about the display said unnamed Jewish groups took a sample of the hair for genetic testing. The reports did not say whether results have been obtained.

Jews have fabricated this improbable legend that “wealthy Germans” were a rather sadistic, barbaric, and hypocritical people, who, despite their “hatred” of Jews, whom they allegedly considered “sub-human” and “dirty”, wanted to sleep on mattresses, drive cars, or play with dolls made with the lice-infested hair of jewish women and children.  The last thing an “antisemite” would want to do is take a bath with a bar of soap made from rendering the fat of dead Jews.  This fable is so absurd that even serious jewish historians are now calling it an “urban legend.”

Germans were so hygienic-conscious that they actually did cut off the hair of all the incoming prisoners to the concentration camps, whether they were jewish or not, because the lice that could be found in their hair carried the deadly typhus disease.  To protect both the Jews and other prisoners so that they could continue to work in the factories to support the German war effort, the Germans, we are expected to believe at risk of jail, then turned around and allowed their “wealthy” children to play with dolls with the hair from dead Jews.  That makes a lot of sense, which is why the results from jewish DNA “tests” can be implicitly trusted.