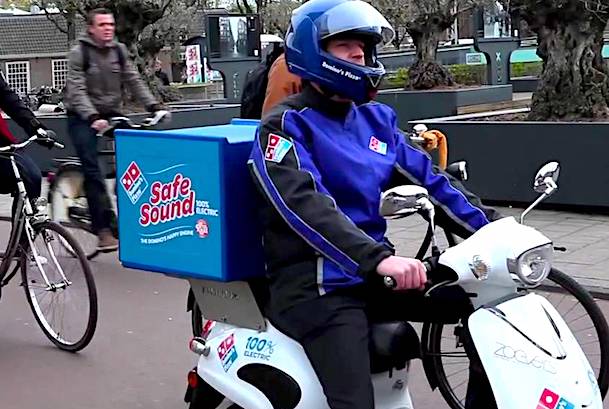 The Domino’s Pizza on Biljmerplein in Amsterdam Zuidoost will equip its delivery workers with bodycams to protect them against robbery by Muslim and African invaders:

“It is almost certain that this plan will continue”, spokesperson Marianne Kemps of Domino’s Pizza said to Het Parool.

Domino’s already successfully experimented with bodycams, subsidized by the center for crime prevention and security CCV, in Rotterdam. In the areas where meal deliverers wore bodycams, the robberies stopped. “We saw that wearing the bodycams alone deters robbers. In addition, the delivery staff felt safer”, Kemps said.

The CCV now agreed that it will subsidize bodycams for Domino’s Amsterdam. The effect of the bodycams will first be tested at the Bijlmerplein location. If successful, the number of bodycams in the city may be expanded.

Domino’s is also taking other measures to protect its meal deliverers. For example, 18 Domino’s branches across the country no longer accept cash payments on deliveries.

After years of decline, the number of robberies in the Netherlands is again on the rise. Meal deliverers are a particularly popular target. In the first seven months of 2019 a total of 88 meal deliverers were robbed, more than double the 42 robberies in 2018.

So the Dutch taxpayers are footing the bill for these bodycams so that they can have their beloved pizzas delivered safely, another hidden cost of diversity.  Apparently, soon everyone in Amersterdam will have to wear personal bodycams because street crime has exploded in this once quiet city.  Yet the authorities have massaged the statistics to reassure residents that Amsterdam is still the “safest city in Europe,” despite the daily bombings and no-go zones.

And even if one of these bodycams caught a robbery on video, the politically-correct police would not release the video to the public to help identify the criminal because all of these robberies are committed by non-Whites, and that is “racist”.

In order to keep this experiment in diversity successful, we need to militarize our total surveillance society and pretend it’s always been that way.  And if you object to it, the police will want to know what you have to hide.