Donald Trump Wants to ‘Bring Back’ the Death Penalty for Antisemites 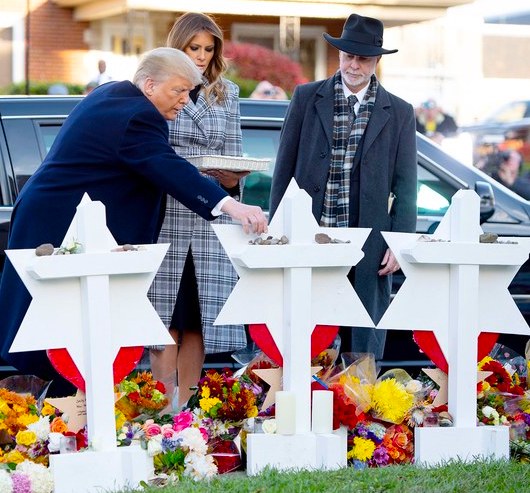 In the wake of the Pittsburgh ‘Tree of Life’ synagogue mass shooting, President Donald Trump denounced the “evils” of antisemitism and demanded that the death penalty be “brought back” for antisemites:

The scourge of antisemitism cannot be ignored, cannot be tolerated, and it cannot be allowed to continue. We cannot allow it to continue. It must be confronted and condemned everywhere it rears its very ugly head. We must stand with our jewish brothers and sisters to defeat antisemitism and vanquish the forces of hate. That’s what it is.

They cannot do this. They can’t do this to our country. We must draw a line in the sand and say very strongly, ‘Never again’.

Of course, there has never been a death penalty in the U.S. for antisemitism, so it doesn’t seem to make sense when Trump stated that he wanted to “bring it back”, that is, unless you understand what he’s really talking about.

When the Jews invaded and usurped power in Russia during the Bolshevik Revolution, one of the first laws they passed was making antisemitism punishable by death.  This law was necessary because the ethnic Christian Russians began noticing that all the bolshevik revolutionaries were jewish and they spoke Yiddish, not Russian.

Nothing has changed in the last 100 years.  The Bolshevik Revolution continues today under a different brand called “globalism”, but the perpetrators are the same.  And this “alarming” rise in antisemitism that the jewish press rants about literally every day now is a direct result of more and more people waking up to the jewish hand in the nation-wrecking agenda of the Left.

The Jews want the legal option of putting to death anyone who opposes them or even criticizes them.  They don’t just want to silence their critics — they want them dead, and if that means bringing back the gallows of the Nuremberg kangaroo court, then so be it.