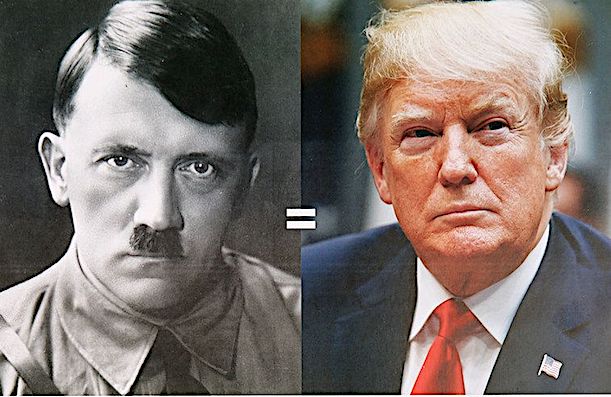 Dozens of Jewish historians and academics have signed a petition demanding that President Donald Trump, whom they liken to Adolf Hitler, be immediately removed from office so as to “restore democracy” and avert another Holocaust:

As scholars of Jewish studies, we are deeply attuned to the convulsions of modern history. We are also cautious about making historical analogies that smooth over the rough crevices of the past. And yet, after witnessing Wednesday’s attempted putsch at the Capitol, it is impossible not to be reminded of the grave dangers of complicity, both active and passive, with an unhinged and egomaniacal autocrat.

We know well how such forms of complicity proved deadly to Jews in the 20th century.

On Wednesday, an unruly mob, animated both by anti-democratic sensibilities and white supremacy, marched through the halls of the Capitol with a confederate flag, set up a noose across from the Capitol and donned shirts mocking the Holocaust. They ransacked offices, defaced the rotunda, occupied the congressional chambers and took selfies to normalize their hatred inside our nation’s greatest edifice of democracy.

The fact is that members of Congress, law enforcement officials and the rioters themselves all bear degrees of responsibility for yesterday’s travesty. Of course, the chief culprit is Donald J. Trump, who long ago abdicated any meaningful commitment to the presidential oath of office “to preserve, protect and defend the Constitution of the United States.” His incitement of the angry mob warrants immediate removal from office, either through impeachment or enactment of the 25th Amendment.

Furthermore, it would be an abdication of responsibility not to censure those Senators and Congresspeople who so recklessly perpetuated the lie of a stolen election that has shaken the foundations of American democracy to the core. And it is necessary to investigate the manifold failures of the various law enforcement agencies in Washington to anticipate the angry mob and prevent it from breaking into the Capitol.

We know well how lethal it can be to fail to call out complicity with corrupt and immoral regimes. We know how dangerous it is to ignore the steep erosion of democratic values and principles in this country over the past four years. And we condemn — in the strongest possible terms — the culture of violence and hate that white supremacy has produced in this country. The time has come to restore legitimacy to government and the rule of law by holding to account those responsible for yesterday’s violent insurrection.

Without coming right out and explicitly stating it — these self-described Jewish “academics” are claiming that unless Donald Trump — whom they liken to Adolf Hitler — is impeached and removed from office, there could be “another” Holocaust™.

This is an example of how the demonstrably fake Holocaust, in the words of Jewish author Paul Eisen,”oppresses” Jews — but it does much more than that — it justifies anything they do to avert “another” one — including gutting the U.S. Constitution and destroying America.

The Holocaust gives every Jew the license to hate and seek retribution — an eye for an eye — against not just Nazi™ Germany but against all of White Christendom.

In the immediate wake of World War II, a group of Jewish terrorists — now “heroes” in Israel — under the false belief that the Nazis™ had murdered 6 Million Jews™ — plotted to poison the public water supply and kill 6 million Germans in retribution.

From cradle to the grave most Jews today — consciously or unconsciously — spend their entire lives vainly attempting to ensure that a fictional event of their “extermination” never happens again — a textbook psychiatric disorder.

Their hypocrisy is mind-boggling — and its success depends on a public that has no real historical reference points or collective memory — an American public, trained by their televisions, to live in a never-ending present — while they obsess about a fictional past.

But Jews are masters of constantly moving the goal posts — the Overton Window — further and further Left — blurring the any distinction between their radical liberalism and spineless kosher conservatism.

And the Overton Window never moves to the Right — once “conservatives” concede ground to the Left, they never regain it — and everyone who finds themselves right of the new center immediately becomes a “fascist”, “racist”, “Neo-Nazi”, “White supremacist”, ad nauseum.

As the Jewish saying goes, “A socialist is a communist with patience.”

You know you live in a Jewish democracy — like the Weimar Republic in 1920s and early 30s Germany — when you are free to indulge in every form of sexual deviancy while people are literally starving in the streets and suicide becomes commonplace — exactly where all of Christendom is headed.

But make no mistake — behind this misplaced Jewish hatred of Donald Trump is the real target of their hatred — White Christian America — the “White supremacists” de jour — who express their antisemitism™ and secret desire to murder Jews merely by voting for liberal republicans.

If Jewry were completely unopposed — and these frothing Jewish academics ran the Amerikan Comintern as they did in Soviet Russia — Donald Trump would be given a show trial and summarily executed — but their hatred and blood lust still would not be satiated.

We saw just how blood-thirsty and sadistic the Jewish Bolsheviks were — allegedly motivated by revenge for a minor series of Russian pogroms — in their genocide of 60 million White Christians.

Imagine what awaits Christendom when they finally have the power to exact retribution for 6 Million™ Holocaust™ victims.

Every day they live to re-enact the crucifixion of Christ — an event, unlike the Holocaust, that actually did happen and truly defines them — and hasten their own destruction in this fantastical revenge plot.