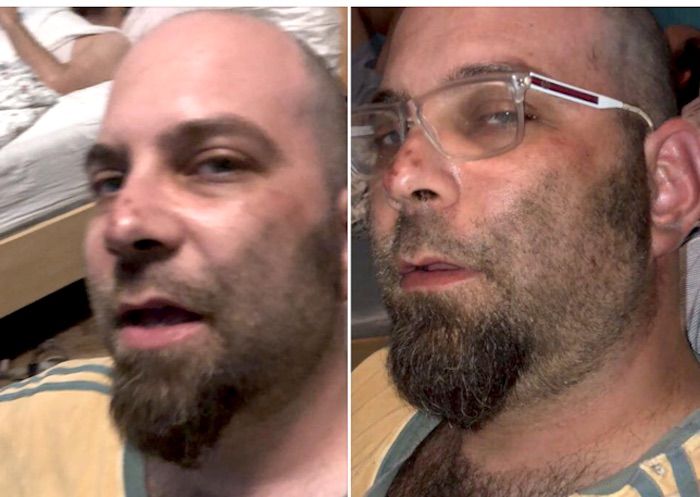 When Jews travel to Poland, they seem to think that they own the place, often behaving in the most offensive ways.  The locals are often forced to tolerate this behavior because they don’t want to be accused of being “antisemitic”, as we can see in the case of this Jew from Brooklyn:

The son of a rabbi in Poland said police in Krakow assaulted him and gave him Nazi salutes outside a synagogue, but police denied the accusation and said he was drunk and disorderly.

In the incident late Sunday afternoon, Yaakov Gluck, 40, of Brooklyn, told JTA that he was prevented from giving a tour of the Kupa Synagogue to friends by a Jewish community employee. Gluck said he insisted that the employee call another member who regularly allows him to show the synagogue to guests, but the employee instead called police, who wrestled him to the ground and did the Nazi salutes to offend him.

Sebastian Gleniu, a spokesman for the Krakow police, denied the allegations concerning any sort of anti-Semitic discourse or behavior by the officers who arrested Gluck and later at the station. He told the news site Wirtualna Polska that Gluck was drunk and disorderly, obstructed the work of the officers called to remove him from the premises and shouted obscenities at them.

Gluck, who was released from custody within five hours of being detained, told JTA he was not disorderly but declined to say whether he was inebriated.

Gluck, a frequent visitor to Krakow to see his rabbi father, Edgar, has had several disputes with some members of the Krakow Jewish community over hosting parties on Shabbat at his apartment and at friends’ apartments. Gluck claims that Jewish community leaders in Krakow wanted to stop the parties because they saw them as competition, but his critics say the events were loud, involved the consumption of alcohol and caused a disturbance in the city’s Jewish quarter.

So it seems that even fellow Jews have complained about this party animal and liar.  But every Jew has a “Get Out Of Jail Free” card just by calling his accusers “antisemites”, and they will always shamelessly play that card when backed into a corner.  And when any Jew, anywhere in the world, accuses someone of “antisemitism”, it makes international headlines.

That fact alone should make any rational person think twice about the enormous power these people wield.

Historically, Poland has had the largest population of Jews in all of Europe, so if any people know about the duplicitous nature of Jews, it’s the Poles, who have an old proverb: “A Jew cries out in pain as he stabs you in the back.”