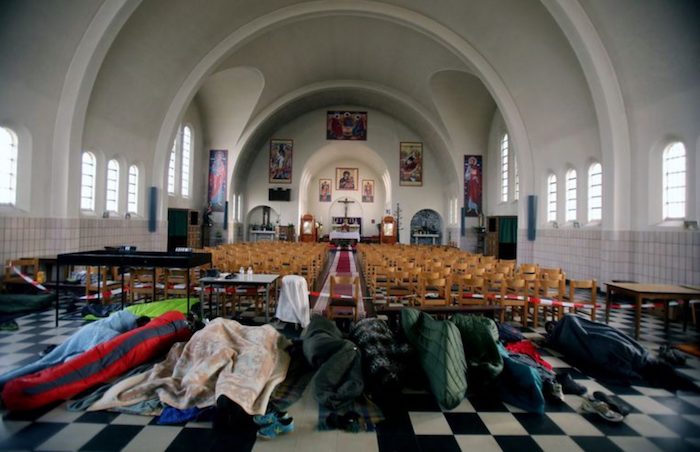 Members of several Dutch churches have decided that to protect illegal Muslim invaders from legal deportation is the “Christian” thing to do, so they are now working with each other to subvert the Dutch immigration authorities:

Today there will be a meeting between several churches to see if they are able to stop the deportations of roughly 400 illegal immigrants. The option they intend to use are “relay race” church services.

The specific case that has lead to this possible action is the proposed deportation of the illegal 21 year old Armenian Hayarpi Tamrazyan. The government is intending to deport her, to stop this she has fled to the “free” Dutch reformed church in Katwijk. Tamrazyan is a member of the Christian Left wing party called the Christian Union. (Who are currently part of the Dutch coalition government).

The minister of the church claims that he believes one should follow the law, but he also says that he feels it’s his duty as a Christian to not comply. Since the father of the family committed political activities in Armenia he claims the family is in acute danger and should not be deported.

This concept of church asylum seems to be a legally dubious choice. Technically Dutch police and government officials aren’t allowed to enter a church during services. This is the main reason the churches want to hold non-stop services to ensure the police or other government officials cannot deport these illegal immigrants.

A lawyer in the Dutch Volkskrant doubted if this right could be used for this goal. The exercising of a right with only the intent to block the government from deporting people who have no right to be in the Netherlands seems not valid.

At least 5 churches will hold a meeting today to discuss the option of church asylum by this method. They have told the press they intend to see if they have sufficient resources to maintain such an action in the long term.

If so, their intention is to immediately use this option to create a safe haven for illegal immigrants. The Netherlands recently had another case of two illegal Armenians teens who ran off when they were about to be deported.

They were eventually granted an exception and allowed to stay while the government initially wanted to deport them. It seems that many Illegal Armenians are emboldened by the lack of resolve from the Dutch Government.

This is a treasonable offense — at least it would be if these churches were protecting “right wing extremists,” but because they are protecting Muslims and non-Whites, these churches won’t face the arrest or imprisonment that they deserve.  Taking it one step further, they will be applauded by the Left for helping promote the multicultural anti-White and anti-Christian agenda.

And notice this story, of course, focuses on one Armenian “Christian” facing deportation, but there can be no doubt the majority of these Arabs facing deportation are either fake Christians who “converted” to avoid deportation, or they are Muslims taking advantage of the church’s policy.

Ironically, when the Catholic Church helped surrendered German soldiers escape persecution after the end of WWII, they were –and continue to be — heavily criticized by jewish groups, but because they were “evil” Germans, the Church was “wrong” to help them in any way.  These Dutch churches, on the other hand, will be praised by the Jews because they are helping promote the jewish nation-wrecking agenda by hiding these Arab invaders from authorities.